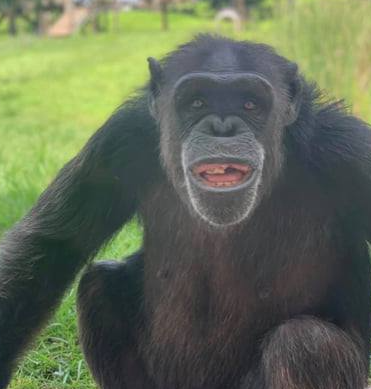 Hello, my name is
Amanda

I was born to my parents Mandy and Rufus, on February 6, 1990, in the Coulston Foundation. Mandy was a good mother. Despite this, I was taken from her a mere three days after birth. I was then sent to the nursery to be raised by human caregivers. Unfortunately, health issues were typical in infants raised in the nursery, and I was no exception. Less than two weeks after being admitted into the nursery, I started my first dose of antibiotics for a fever. I would also have stomach issues which also required treatment. Despite being sick and on medication, at three weeks old, I was placed on an x-ray measuring study that required being anesthetized regularly. At two years old, I was placed on two more consecutive studies, which required frequent throat cultures and blood draws. Each procedure required me to receive a dose of Ketamine so that the technicians could safely handle me. Eventually, I was put in a group of girls my age and became friendly with another little chimp named Lisa. After Save the Chimps took over the Coulston Foundation in 2002, they started making their observations and notations about the chimps. My new caregivers noticed that I tended to sleep more than the other chimps. My caregivers had a challenging time waking me up. Upon further investigation, veterinarians discovered I was having a type of seizure. The veterinarians put me on medication to help control the seizures. My caregivers, along with the veterinary staff, carefully monitored me.

My family and I migrated to Florida in March 2007, we were introduced to another family of chimpanzees already living in Florida. We all eventually became known as Lou’s family. This new approach to life is a nice change of pace for me. I have become more outgoing with both my caregivers and fellow chimpanzees. I’m very close with my good-friend, O’Dell, and also enjoy hanging out with Opal, Olivia, and Katrina.

Chimpanzees are very social and frequently celebrate exciting things together. The focus of a sanctuary is helping each chimp become the most fulfilled version of themselves. While Amanda may have been misunderstood in the past, Save the Chimps has enjoyed getting to understand her. Providing her with the tools and resources needed to grow and live life on her terms in the future.