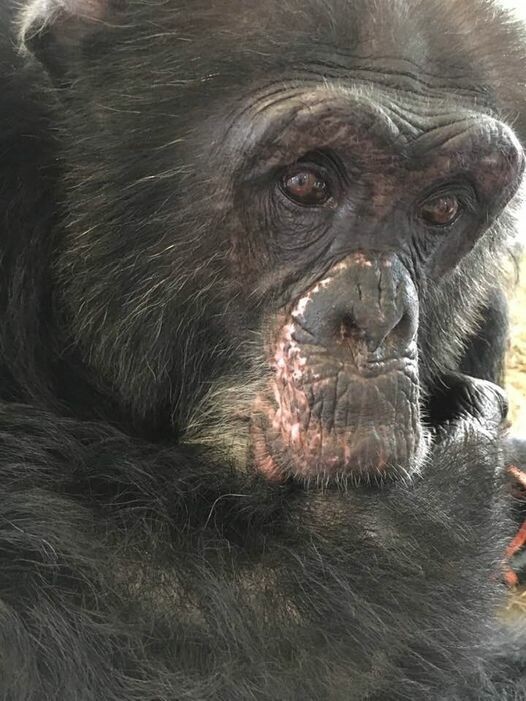 Hello, my name is
Devon

I was born February 4, 1993, at The Coulston Foundation in Alamogordo, NM to my mother Samantha and father Rufus. According to my records, I was born two weeks prematurely and my mother did not care for me properly at birth. I was brought to the chimpanzee nursery to be raised by humans. I received my first dose of Ketamine when I was just three months old and was anesthetized ten times for blood draws in my first year alone. When I was six months old, it was noted that I routinely shake my head from side to side and that I had done so since birth.

When I was 18 months old, I was removed from the nursery to enter a research study, but the study was canceled the very next day. I was anesthetized for physicals 4 times per year for the next two years. I suffered from considerable behavioral and health problems. In November 1996, I was found unresponsive in my cage, suffering from hypothermia, hypoglycemia, and a respiratory infection. December 1996, a behavioral report was written that indicated that I shake my head almost constantly, and also have screaming fits and episodes of hair pulling and self-biting. The behaviors persisted despite extra human attention. In March of 1997, it was noted that I had gotten my fingers stuck in grates daily ever since I was moved from the nursery. I even had to be anesthetized because my finger had gotten swollen to the point where it could not be removed even with lubrication. In May of 1997, my record noted that I was screaming excessively and injuring my back. In June 1997, I was found having a seizure in my cage; had a heart arrhythmia, and my body temperature was 94.8 degrees. I was still breathing, so fluids, oxygen, Valium, and heat were administered. Within 5 hours, I had recovered and was playing with my friend Taylor; I was presumed to have suffered a “cerebrovascular accident.” I was not observed screaming or pulling my hair again after this incident, and no more mention was made of my obsession with sticking my finger in the grates, although the head-shaking continued. My unusual behaviors led the laboratory behaviorists at the Coulston Foundation to characterize me as “autistic-like” based on a mere 36 hours of observation and 8 hours of direct interaction.

Save the Chimps rescued me on September 16, 2002, when the Coulston Foundation closed its doors. I exhibited some behavioral peculiarities since my rescue, including the head-shaking (I look like I’m frequently shaking my head “no”) and my reluctance to be locked outdoors. I have not had any trouble relating to my caregivers or fellow chimps, however. I like to be on the lookout for people driving by or arriving at my building so that I can be the first to greet them. When the other chimps are having an argument, I like to step in as a mediator. Can’t we all just get along? I am a charming, rambunctious, and noisy—in other words, a typical chimp! In 2011, I traveled to Florida, where a new island home was waiting for me and my chimpanzee family.