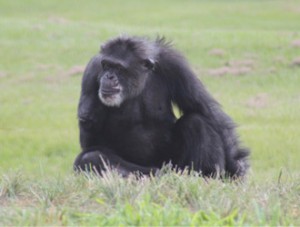 Ever since we’ve known Rufus, he’s been young at heart and unwilling to accept that fact that he’s getting older.  Even though he’s about 45 years old, quite elderly for a chimp, he’s always on the go, and often can be found chasing the young upstart males around the island.  He seems to hate the quiet—if everyone is quiet and peaceful, you can count on Rufus to make some noise!

The bottom line is, he’s full of vim and vigor and has an amazing spirit. 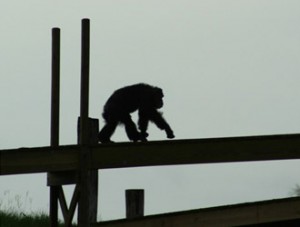 So we were very distressed this past August when we learned that Rufus would need his right arm amputated.  Rufus had been treated for an infection in the bones of his wrist, but he was no longer responding to treatment.  The infection would spread further up the bones of his arm and eventually cause death if the arm was not removed.  But we had concerns.  Rufus is an old man—would he survive the surgery?

Furthermore, would the loss of his arm confuse or depress Rufus, crushing his jovial spirit? 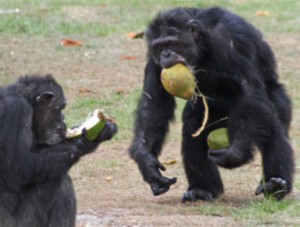 Anytime a chimp is anesthetized for a medical procedure, it is a risk.  The best we can do is have a thorough knowledge of Rufus’ overall health, and have a skilled team on hand to perform the surgery and monitor Rufus closely during the entire procedure.  We knew that Rufus had a strong heart, and had done well under anesthesia in the past.  For his medical team, we had on hand Save the Chimps’ veterinarians Dr. Jocelyn Bezner and Dr. Linda Gregard, as well as Vero Beach, Florida veterinarian David Kilpatrick, DVM, DABVP, who donated his services.  Dr. Kilpatrick assisted Save the Chimps in identifying an orthopedic surgeon, Guy Hickman, Jr., M.D., to perform the amputation.  Dr. Hickman generously donated his services, and his expertise would be invaluable in ensuring a smooth and efficient procedure.

Before we came to a final decision to perform the amputation, we gathered his caregivers together to discuss the pros and cons of the procedure.  The surgical risks to Rufus were explained.  As for how he would react to losing an arm, there was simply no way to know for sure, and very little precedent to offer us any insight.  No cases of an adult chimp having an arm amputated were found, although young chimps and orangutans who lost limbs through injuries had adapted with no trouble.  Save the Chimps had rescued the late Tami who had undergone a leg amputation while in a research lab, and she also appeared to adapt well.

Although worried about the surgery, Rufus’ caregivers felt that he would bounce back and soon be back to his rambunctious self.  They wanted to give him every opportunity for a long and healthy life.

Rufus’ life would be shortened if his arm was left intact.  The dedicated staff saw no other alternative but to amputate Rufus’ arm, and do whatever it took to provide him excellent post-op care and lift his spirits if needed.

On August 28th, the surgical team was assembled and Rufus’ arm was amputated mid-upper-arm, about six inches below the shoulder.  The procedure went very smoothly, and the entire surgery lasted just an hour.  Dr. Hickman quickly and skillfully removed Rufus’ arm, and Dr. Kilpatrick, Dr. Bezner, and Dr. Gregard took great care in stitching and wrapping the incision.  There were no complications, and all we had to do was wait for Rufus to recover from the anesthesia.  He would be hospitalized for a minimum of five days to monitor him closely and allow the surgical site to heal.

When Rufus first awoke from anesthesia, he lifted the remainder of his arm in what looked like an attempt to brace himself.  He seemed a little puzzled but not distressed, and made no attempt to remove his bandage.  He rested comfortably the entire day, and by the next morning was up and eating.

His recovery was taking place in one of the cages used to transport the chimps, so we were able to bring Rufus to his building to visit his family.  He enjoyed this greatly, and we could see he was already eager to get back home.  After a few more days of hospitalization with daily family visits,
Rufus was able to do just that.

When Rufus first moved home, he was reunited with Ted.  Ted has very poor eyesight, so we were hopeful that Ted would not notice the incision on Rufus’ arm.  Chimps are always very concerned about wounds on other chimps, and if anyone has an injury or incision, it’s guaranteed that the area will be groomed.  If any other chimp opened up the incision, Rufus’ recovery time would be lengthened, so Ted seemed to be the perfect companion.  We were right about Ted—but Rufus was impatient to get back with his entire family!
Unfortunately for Rufus, he had to wait.  After a week we cautiously allowed Marissa to visit him, but she immediately focused on the grooming and picking at the incision on his arm.  After such a successful surgery, we couldn’t take the chance that Rufus would not heal properly, so Marissa had to go back with the group.  Rufus was allowed to roam his island with Ted’s company, and got lots of enrichment to occupy his time.  Incredibly, just three weeks after his surgery, Rufus got the all clear to be reunited with his family. 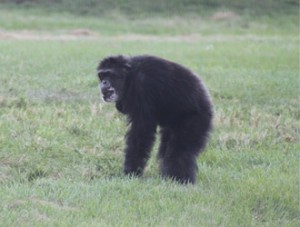 Rufus rejoined his beloved family and hasn’t looked back.  The other chimps were curious about his missing arm—for about three minutes.  Then they shrugged their shoulders and got back to the business of being chimps.  Thankfully, our fears of a confused, depressed Rufus never materialized.  If anything, he is more energetic and feisty without his arm!  It’s likely that despite all of the antibiotics and pain medications Rufus received during treatment, his wrist caused him discomfort and actually slowed him down.  He’s back to running around the island, climbing the platforms, chasing the young males, and causing as much mayhem as he possibly can.

Rufus is an inspiration. 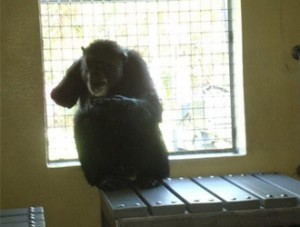 When our late founder Dr. Carole Noon first met Rufus, he was living alone in “the Dungeon”.  But even then, he had a twinkle in his eye.  All Dr. Noon had to do was wiggle her fingers at Rufus like she was going to tickle him, and he would laugh.  All that “joie de vivre” was trapped in a concrete box, and could have withered away during his years in research.  But he hung onto it, and it fully blossomed when Rufus was released from that prison onto his island in Florida.

His magnificent spirit held him in good stead during this chapter
in his life as well.
It seems there is nothing that can slow old Rufus down! 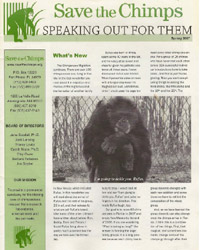 We’ve come so far and it’s your compassion and support that
has made this all possible.
Thank you for being a part of our family.