Save the Chimps is grieving the loss of two very special elder chimpanzees who passed away recently, Bubba and Nuri. 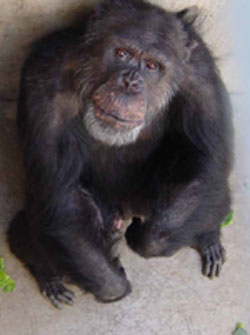 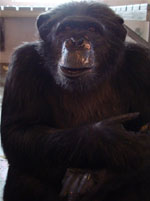 We know very little about Bubba’s history. His date and place of birth are unknown, and most of the records of his life prior to 1997 have vanished. We believe that Bubba was born in the late 1960s or early 1970s, possibly in Africa. Sometime prior to 1983, Bubba resided at the Buckshire Corporation, where he was known as “Bobby Sands.” In September 1983, Bubba was transferred to The Coulston Foundation. His file contains no records between 1983-1997, so we do not know if he was used in biomedical research experiments. We do know that Bubba was used as a breeder, fathering 16 children, 10 of whom are residents of Save the Chimps. 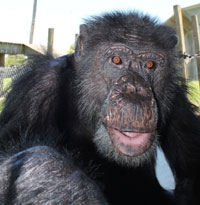 Bubba was an engaging and charming chimpanzee, and so full of energy and life. He enjoyed living in a chimpanzee family. He became a good friend to his buddy David, a father figure to little Melody, and was of course more than happy to be a suitor to Gail, Nadia, and his other lady friends.Bubba relished island life, and more than anything, he loved to run. Having never experienced the freedom to gallop at full speed for most of his life, Bubba was eager to make up for lost time. Watching him lope from one place to another (sometimes accompanied by Melody, whose little legs churned rapidly in an effort to keep up) was always a sight to behold. Bubba’s absence is deeply felt by both his chimpanzee family and the human caregivers who loved him dearly.

Nuri was shy, but very gentle, with other chimps. Although she had no trouble living in a chimp family with Thoto, Scarlett, Millie, and Shakey, she did feel insecure in open spaces. Sadly, she never chose to go outside onto the island when she arrived in Florida. But Nuri found joy in other things. She loved unusual, colorful objects, such as knit hats, Hawaiian shirts, purses, or small toys. She carried them with her, and these objects became known as her “babies.” She also loved gazing out the window of her rooms in Florida. Although 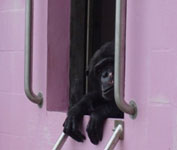 We bid farewell to these two wonderful souls,
whom we miss desperately,
but whose spirits are now free.
We love you, Bubba and Nuri.

To all our supporters – it is your compassion, devotion and generosity that makes our work possible.

It is because of YOU that Bubba and Nuri lived with a family on an island home surrounded by Mother Nature’s beauty.

On behalf of everyone at Save the Chimps, chimpanzees especially, thank you for being a part of our family.