“Carole Noon had such a strong personality, such determination, and, above all, such a love for chimpanzees.”—Jane Goodall 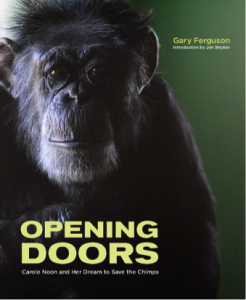 2013 was a big year for chimpanzees in the news. Now, with President Obama signing a bill in late November paving the way for the retirement of most government-owned chimps to sanctuaries following years of service in medical labs, the future for these chimps is looking brighter. As the world awaits news about these chimps’ release into sanctuaries, a timely new book published by Save the Chimps—the world’s largest chimpanzee sanctuary—helps us understand the issues at stake.

Author Gary Ferguson, a distinguished wildlife and conservation writer, takes us back to 1997 and the initial rescue of 21 chimps who had been released by the U.S. Air Force into the laboratory of the Coulston Foundation in New Mexico, a biomedical facility with the worst record of any lab in the history of the Animal Welfare Act. He recounts how, spearheaded by primatologist Dr. Carole Noon, Save the Chimps sued the Air Force on behalf of the chimpanzees and after a year-long battle, gained permanent custody of 21 chimps. Less than one year later, with Coulston facing financial disaster, Dr. Noon had the opportunity to purchase the facility with support from the Arcus Foundation, thus taking on the care of 266 additional chimps.

Opening Doors describes the daunting challenges and countless rewards of developing the 200-acre sanctuary in Ft. Pierce, Florida to accommodate the emotional needs, dietary requirements, medical conditions, and distinct personalities of almost 300 chimpanzees. As Dr. Noon went on to rescue more chimps from biomedical labs, the pet industry, and the world of entertainment, the compelling narrative takes us behind the scenes to describe the meticulous care with which Dr. Noon trained her staff, expanded the facilities, and socialized the chimps to create a refuge they could call home for the rest of their lives. First-hand reminiscences from Dr. Noon and others infuse the tale with warmth, humor, and affection.

Along the way, we get to know the chimps, from Dana, one of the original Air Force chimps who played a pivotal role in creating families amongst the chimps, to Waylon, the gentle giant whom Dr. Noon called the nicest chimp she had ever met. Throughout the book, vibrant photographs depict the chimps playing, socializing, or simply relaxing and enjoying a quality of life that seemed impossible during the time they were held captive in labs, roadside circuses, and the backyards of people who kept them as pets.

As Dr. Noon always said, “chimpanzees are amazing people.” Opening Doors demonstrates not only how resilient, complex, and engaging chimpanzees truly are, but also how extraordinary Carole Noon was, herself, and how, through her dedication to providing a retreat for hundreds of chimps in need of a humane home, she helped pave the way for a more humane world.

About the Author
Gary Ferguson is the author of over 20 books on science and nature, including the award-winning Hawks Rest (National Geographic Adventure Press), as well as a keynote presenter at conservation and outdoor education gatherings around the country. He has written for publications ranging from Vanity Fair to The Los Angeles Times.

Jon Stryker is an architect, philanthropist, and activist for social and environmental causes. He is founder and president of the Arcus Foundation, a private foundation that supports great ape conservation as well as human social justice causes.