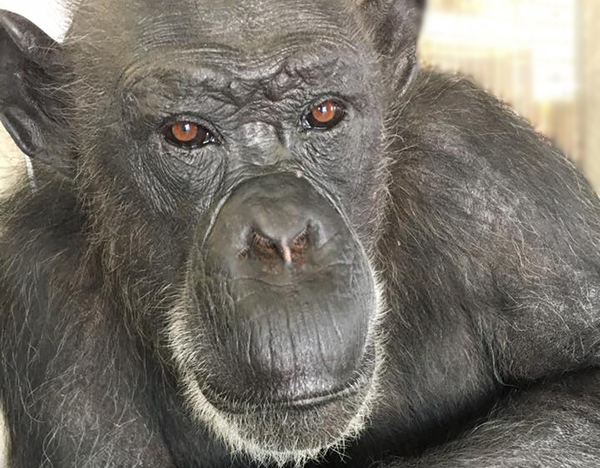 We are deeply saddened to announce the passing of Beth, a kind and gentle female chimpanzee who lived in Rufus’ Family at Save the Chimps and passed away due to complications of heart disease. Beth was a strikingly beautiful chimpanzee with distinctive eyes and a smooth, dark face. She was warm and outgoing to all, chimpanzees and humans alike. Her gentle heart endeared Beth to all who knew her. 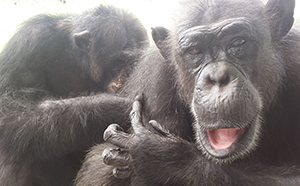 Beth was born on March 3, 1984 on Holloman Air Force Base near Alamogordo, New Mexico, to her mother Mary and father Doug. Mary was allowed to care for her for just two days before Beth was removed from her and taken to the laboratory nursery to be raised by humans. She began receiving liver biopsies as young as 5 months old and was placed in her first research study at 18 months. When she was 11, she entered the laboratory’s breeding program. The first male she was mated with was her own father, Doug, as the laboratory failed to check her parentage. She lived with Doug for three weeks before they were separated, and she was introduced to a male named Sampson. Soon after, she was confirmed to be pregnant. Beth gave birth to two babies who are now residents of Save the Chimps – Delilah and Walden. 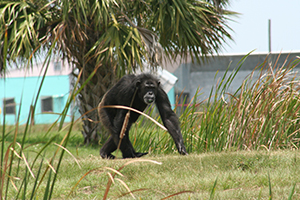 In 1997, Beth’s custody was transferred from the US Air Force to the Coulston Foundation, a research lab in Alamogordo, NM, with a long history of violating the Animal Welfare Act. In September 2002, Save the Chimps rescued 266 chimpanzees living at Coulston, including Beth. Despite all she had been through, Beth immediately struck us as a gentle and loving chimpanzee who warmly greeted her new caregivers each morning. Beth then joined the largest chimpanzee group at Save the Chimps – Rufus’ Family. Along with her best friend Lauryl, Beth and the other members of Rufus’ Family traveled across the country to their new home at Save the Chimps, where they felt grass beneath their feet for the first time. Beth spent the rest of her life roaming her expansive island habitat and knowing the love and companionship of a chimpanzee family. 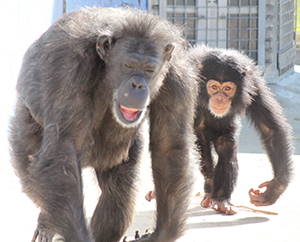 Beth had a soft spot for youngsters that lasted well into their adulthood. When Beth’s friend Lauryl had a baby named Leo in 2007 due to a failed vasectomy, Beth immediately became a wonderful “auntie” to him. Despite Leo’s trouble-making tendencies as he entered his pre-teen years, Beth was always a steady and loving figure in Leo’s life. She also had a deep, motherly bond with both Gerro and Spudnut, two young males who grew up knowing Beth’s affection. She loved getting to have alone time with either of them at any opportunity. No matter if there was conflict, food stealing, or rambunctiousness around her, caregivers described Beth as always patient and forgiving. Beth was also very warm and sweet to her caregivers and enjoyed spending quality time with them. When she felt she wasn’t getting enough attention from her caregivers she would make a unique sound that sounded like a horse or a loud sneeze. After using this special sound to get attention, caregivers would often playfully say, “Bless you!” – and accept her invitation to play. She also had an endearing habit of giving her caregivers “gifts.” This is something we have observed many chimps doing over the years. Our Welfare Coordinator, Tracy, recalled that Beth was the first chimp she met to give her a gift. Beth gently handed Tracy a paper bag she had found on her island. Long-time caregiver, Torrie, recalls Beth giving her a gift on the first day they met – a green bean she wasn’t interested in eating. When Beth’s health declined before her passing, another long-time caregiver, Deanna, was encouraging her to eat and was pleased that Beth was eating “monkey chow,” which is a nutritionally complete biscuit that many of our residents love. After eating for a while, Beth had two pieces left. Deanna spoke softly to Beth, telling her how happy she was to see her eating. Beth looked at her for a moment and gently gave Deanna one of the two biscuits she had left. We will never forget how kind and loving Beth could be in the face of any situation. Though we miss Beth dearly, we are grateful to watch her kindness live on through her son Walden and daughter Delilah, and to know we gave her the many years of peace, dignity, and companionship she so deserved. Rest in peace, Beth. We will miss you always.