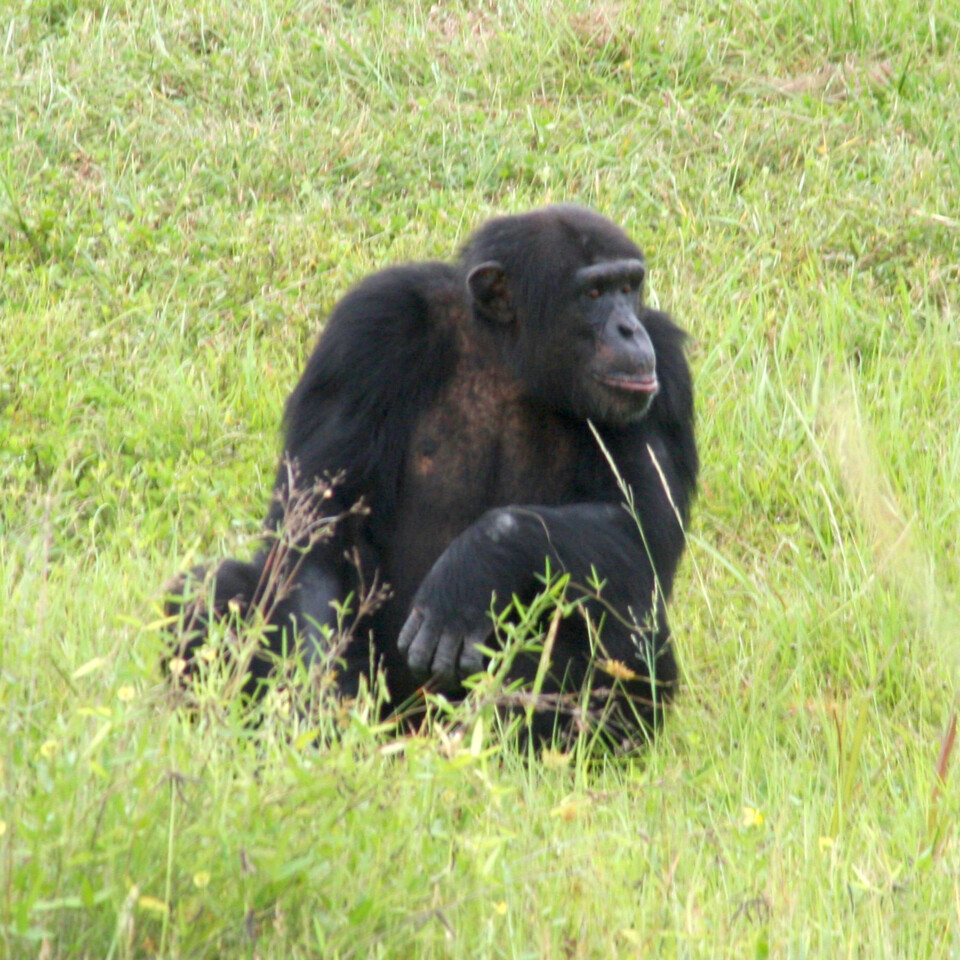 Hello, my name is
Spudnut

I was born to parents Donna and Wes on February 8, 1996 at the Coulston Foundation, a biomedical research laboratory. During a routine physical I was described as a healthy, handsome baby and I definitely grew into a striking adult. I resemble a juvenile gorilla, giving me a distinct look. At four months old, my mother and I were re-introduced to the group Donna had lived with previously. The group included female chimpanzees, Kohei and Mallory, who were eleven at the time. Mallory, who never had a baby of her own, took a special liking to me and spent a lot of time with me. At just over two years old, I was weaned from my mother and moved in with two young girls my age, Sherry and Delilah. Fortunately, I was never used in any research.

The staff at the Coulston Foundation completed questionnaires about the chimps in their care to record and share information about them. I was a playful toddler who liked to climb and swing. I also liked any food I was given which is still true today! Even after a full meal I will ask for any leftovers after everyone else has eaten. When my family first arrived in Florida, I appointed myself the unofficial dinner bell and would announce the arrival of each meal to my family with a joyous food grunt.

At three years old, I was placed in a group with other young boys. When Save the Chimps took over the Coulston Foundation in September 2002, we were at that silly age when young chimps like to push boundaries in harmless ways. These antics led to us being affectionately nicknamed the hooligans by sanctuary staff. Each of us grew into very friendly adults. However, at the time large groups were being formed by STC staff, the decision was made to place each of us boys in different families to spread our energetic personalities across the groups. I eventually became a member of Rufus’ family, the largest group at the sanctuary.

I have a very sweet disposition and can be very sensitive when I’m injured. Ever since I was young, any time I had an injury I would show the area to my caregivers with a wide-eyed look of wonder and concern about what had happened to me. Fortunately, most of those injuries could be “cured” with a sip of juice. This simple reward for cooperating with my health care could go a long way toward treating any significant injuries in the future.

When Rufus’ group was formed, I and another young male, Gerro were taken under the wing of an older chimp named Ted. When our group migrated to Florida in June 2006, Ted quickly discovered getting us out of the trouble we started was a full-time job! The group spent many afternoons chasing us around and Ted would be right in the middle of it all defending us. We also had a devoted aunt figure taking care of us. Beth, a beautiful soul, loved us fiercely. Sadly, Ted and Beth have passed away but we like to think they are still watching over us and would be proud of the adults we have become.

The road to adulthood definitely tested the fraternal relationship between Gerro and I, at one point during our adolescence our caregivers felt it would be in my best interest to keep us separated. We took turns being with the group while our caregivers closely watched and waited for the day when we would overcome our differences. During this time, we could still interact and groom each other through the mesh that separates the indoor rooms. As we reached adulthood our relationship shifted. With Gerro now a confident alpha and me being less impulsive, the time seemed right. We were reunited and were thrilled to be together again.

For a while my best friend was Miller, another male in the group who is a few years older. Miller loved spending time with me and was a frequent companion during my difficulties with Gerro. My next close friendship was with a male several years older, Spud. When I find myself needing back up during disagreements in the group, I search out Spud for reassurance.

Living in a large, dynamic group has given me many opportunities to develop into who I am today. Over the years one thing that has been constant is my love for the ladies in the group and I spend a lot of time trying to attract their attention. My favorite is Daphne, a curvaceous lady with beautiful eyes. Crushes on girls and good times with friends are just a few of the experiences I’ve been able to enjoy over the years while living my life at the sanctuary. I’m still young and look forward to many years living happily in sanctuary.