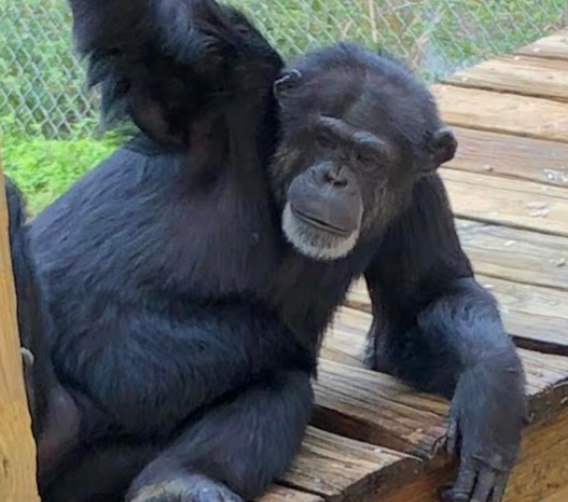 Hello, my name is
Sandy

I was born in Alamogordo, New Mexico, on February 23, 1988, at the Coulston Foundation. Unlike most babies at the Coulston Foundation who were taken from their mothers at birth to be raised in the nursery, I was able to stay with my mother, Montessa, for two years. At ten years old, I was put on my first protocol. During this time I struggled with making chimpanzee friends my own age.

In 2002, me and 265 other chimpanzees from the Coulston Foundation were rescued by Save the Chimps, and over the course of nine years were each transported to our new sanctuary home in sunny Florida. I became best friends with Andrea, a spunky female in my group, and I can often be found cuddling with her. I have since formed many new friendships, and am very loyal and protective. Andrea, Kippy, and I are often called “The Trio” by our caregivers because we are such good friends. I also like hammocks and will snuggle down in them and relax for an afternoon. I am no longer fearful of humans, and am now playful with my caregivers, especially in the mornings. I relish sanctuary life and love spending time with my friends outside on our island.