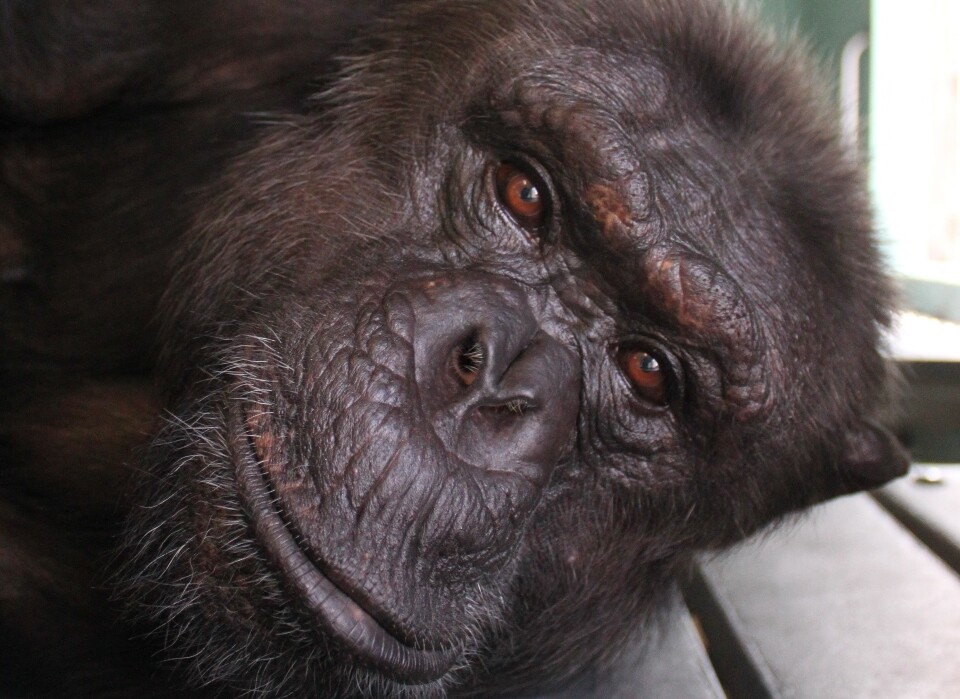 In loving memory of
Norene

Norene was born Nov. 3, 1986, to her mother Rosemary at The Coulston Foundation (TCF). Norene was taken from her mother approximately 36 hours after she was born, although there is no indication that Rosemary was a bad mother. She was taken to the nursery, and had frequent health problems for the first few years of her life. In July 1989, Norene was moved out of the nursery and into a cage with some other young chimps. Norene was used in three different biomedical research studies, one of which lasted a year and involved weekly infusions with an experimental monoclonal antibody.

In 2002, Norene was rescued by Save the Chimps when TCF was on the verge of bankruptcy. She was an extremely intelligent and dominant chimp and enjoyed observing her caregivers closely. She took great pleasure in cleaning her family’s indoor housing using a hose, squeegee, sponge, and bucket, a skill she could have only picked up by watching our daily activities.

Norene had long suffered from significant heart disease which was characterized by arrhythmias. In fact, four years ago, the veterinary team at Save the Chimps was able to resuscitate her after a cardiac event and extend her life. Norene’s observant and intelligent characteristics aided in her success in voluntarily taking part in her health care! She was trained to place her fingers on a device called a “Kardia” for accurate ECG tests. The rewards of juice or grapes may have had something to do with it, but the process of learning the correct steps in the procedure was also an enriching and mentally stimulating experience.

When Norene collapsed last month, CPR was performed; however the veterinary team was unable to resuscitate her a second time. Norene had sudden cardiac death due to a fatal arrhythmia caused by scarring in her heart muscle. It’s never easy to say goodbye to a dear chimpanzee like Norene. We’re grateful for the years she spent with us, living her best life at Save the Chimps.

Donate today, in memory of Norene.