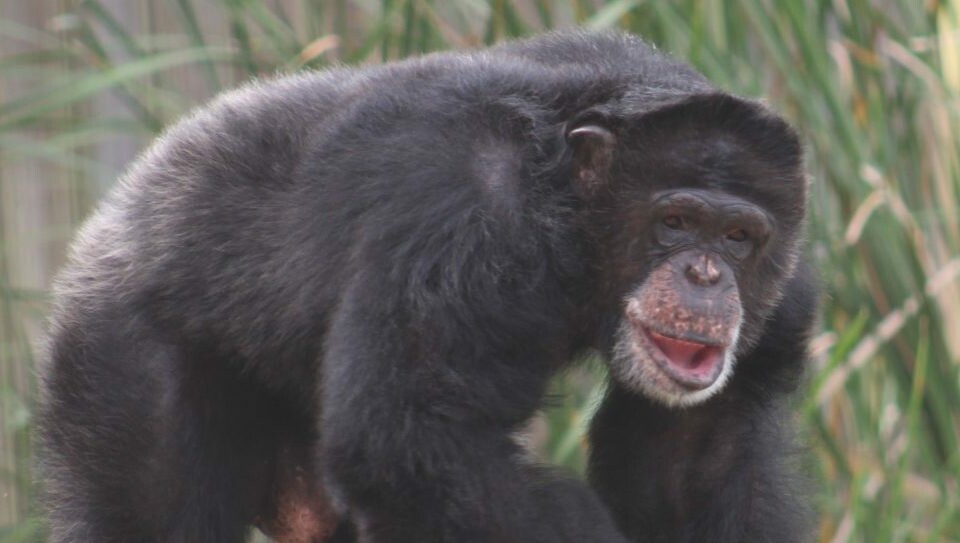 Hello, my name is
Miller

I was born to parents Jacqueline and Emory on January 17, 1991 at the Coulston Foundation, a biomedical research laboratory. I needed CPR right after I was born, but thankfully the rescue attempt was successful and I recovered. As a precaution, I was taken to the nursery to be raised by human caregivers. After this difficult beginning I bounced back quickly and was an active baby, opening my eyes when handled and eagerly drinking my bottle. At just two months old I was placed in my first study. The researchers struggled to get the catheter in my tiny leg and because of this they had to cancel the procedure on more than one occasion. I resisted the medical testing unless I was being held by a caregiver.

Early on the staff at The Coulston Foundation recognized that I was very people oriented. After being cradled and nurtured by my human caregivers as an infant, I longed for this connection after I moved out of the nursery and human contact was no longer readily available. I tried reaching out to other chimps my own age for reassurance. Behavioral staff described me as clinging to another young chimp, Elijah, while rocking together. Elijah didn’t crave as much contact and often avoided me. When this happened, I would reach out to caregivers or simply sit alone on the bench, and they noted “curled up and hunched over himself…with his head on his chest.” Although it doesn’t happen often, as an adult I sit in this same posture after my feelings have been hurt by another chimp. I often wrap a blanket around my calves for comfort.

At the tender age of one and a half, I was loaded on a truck and sent to the Center for Disease Control (CDC) in Atlanta, GA along with several other young chimps. Loaning chimps from one lab to another was a common practice at the time. While at the CDC I lived in a 5×5′ cage (twenty-five square feet total), enduring blood draws and liver biopsies for over five years. Eventually Elijah and I returned to the Coulston Foundation in New Mexico. Due to a communication error between staff about who was who, we were called by the wrong names for almost three weeks before the mix-up was discovered. We were very confused until the mistake was fixed!

Shortly after my return, I was introduced to groups of young boys about my age. During this time I met Arnulfo and a couple years later, Brett. After Save the Chimps took over the Coulston Foundation in 2002, all three of us would eventually become members of Rufus’ family. At twenty-seven members, the original Rufus family was the largest chimpanzee group at the sanctuary at the time. We migrated to Florida in June 2006 where we had acres of open space in front of us to run and burn off energy. We could finally stretch out our legs and feel a sense of freedom for the first time.

Maybe due to my sensitive side, I struggled with how to deal with difficult situations. Starting when I was very young, I reacted to stress by screaming and slapping my head. In extreme circumstances I pulled my hair. This is something that continued into adolescence. In the sanctuary they have learned what is likely to trigger these episodes and help me either avoid the situation altogether or provide me with something to distract me so I’m able to make it through without becoming overly upset. As I’ve grown more confident with age and developed other ways of dealing with things, this is happening less and less.

STC staff were immediately smitten with me and were struck by the unique color pattern on my face, especially around my eyes. I almost look like I’ve been airbrushed with makeup that reminded the staff of BoBo the clown, the beloved children’s entertainer. To this day my caregivers still sometimes affectionately call me by my nickname BoBo. I’m a chatty fellow and known for my unique voice that fills the building with happiness. When people enter my home I’ll welcome them with a chipper hello and a smile that lights up my eyes. Each night when my caregivers finish their day and announce their goodbyes to the group, I’ll call back to them, wishing them a good night in return. These exchanges are a precious reminder of the bond between chimps and caregivers at the Sanctuary.

The residents form many friendships over the years during different times in our lives. During my awkward teenage years my best friend was Spudnut. We were so close, I would sometimes cry if I wasn’t with him. Over time our friendship faded and I started spending more time with Wayne, a handsome fellow who fancies himself to be a ladies man. A bit of a late bloomer in this department, I seem to be discovering girls and can be seen following them around hoping for a bit of attention but not quite sure what to do. Maybe Wayne can teach me a thing or two!

My life started off sad but now is filled with joy. These days I’m surrounded by loving companions who fill me with warmth and security. My future is bright and full of possibilities and that’s what sanctuary is all about.