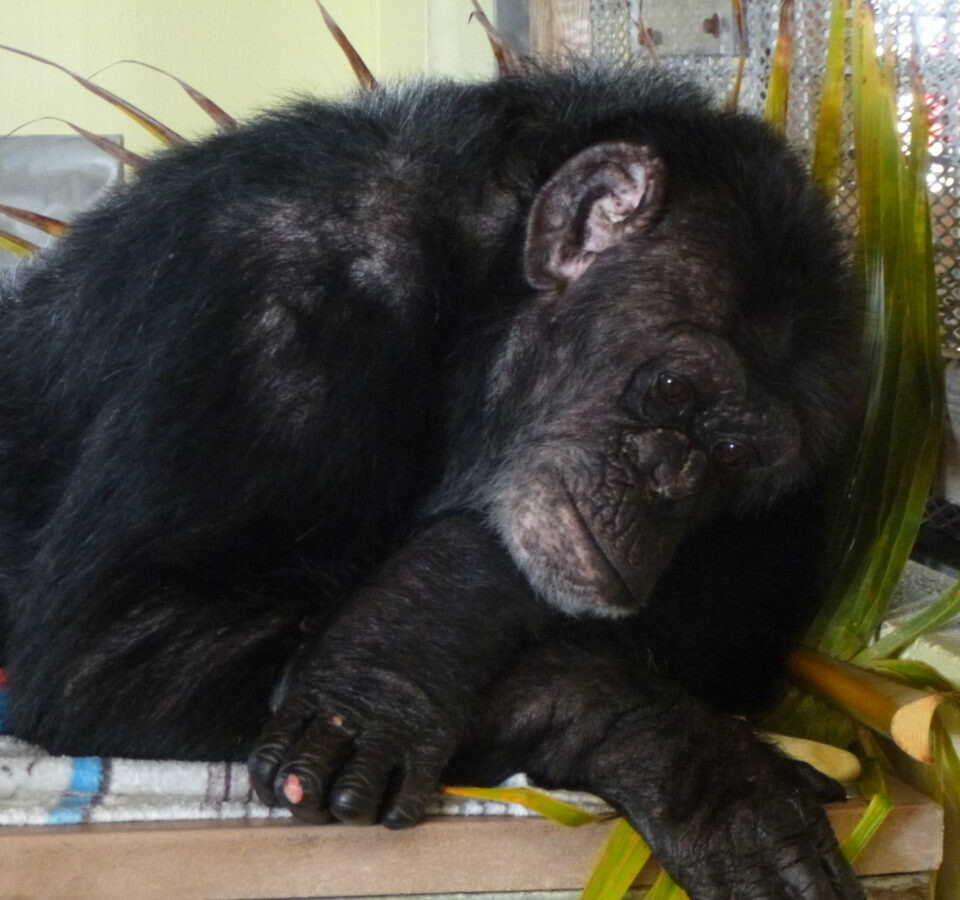 Hello, my name is
Iris

With heavy hearts, we announce the loss of our dear friend Iris, a 36-year-old female chimpanzee who came to Save the Chimps in 2015 after years in isolation at a small, unaccredited zoo. When we first met Iris, she was pale and had patchy hair all over her body, and her legs were weak. Though quiet when she first arrived, she immediately expressed interest in a male chimpanzee, Abdul, in a neighboring enclosure. Within days of her arrival, we decided to introduce the pair. Iris and Abdul embraced one another as if long lost friends, and we watched as their friendship blossomed into one of the most special we have ever witnessed here at the sanctuary.

With support from her new friend, Iris was thrilled to begin spending time on her new, large island habitat. She quickly showed us how bold and inquisitive she was! Even the very first time she set foot on the island, she marched to the farthest reaches of the habitat – something many captive chimpanzees are afraid to do after spending most of their lives indoors. Within weeks, Iris’ skin darkened and her hair began to regrow. She became more and more confident by the day.

We began integrating Iris into a group called Air Force Island, which was the first island built at the sanctuary. Iris was eager to make new friends and things were going smoothly. Unfortunately, one day something went wrong during one of her introductions. Iris unexpectedly collapsed and was unresponsive. To our immense relief, and thanks to a quick response from our veterinary team, she recovered from what was a cardiac event.

Iris was medically evaluated and diagnosed with heart disease. We made the decision to pull back from her introductions to reduce the risk of stress-triggered cardiac events. At 34 years old, Iris was already considered elderly, so we created an environment that was both enriching and safe for her. And for Iris, that meant always having her dear friend Abdul by her side.

Her interactions and play sessions with humans were always on her terms. Iris had a tough exterior and you had to work to earn her respect. All of us here at Save the Chimps felt like royalty if Iris gave us her attention or an invitation to play. We learned a few ways to slowly win her heart: patience, food (the way to many chimps’ hearts!), and Mardi Gras beads. That’s right – Mardi Gras beads. At Save the Chimps, we never force the chimps to wear clothing or accessories, but we give them anything they might find interesting or enriching, and Iris happened to love shiny Mardi Gras beads. She often kept them hanging around her neck, either as a way to carry them around or perhaps because she knew she looked good! We like to think it was the latter.

For those of us who knew Iris, there is no denying that she loved drama and chaos! She loved to get neighboring chimps riled up by displaying at them, and Abdul was always close by to jump in and show off his strength to other chimps in support of Iris! She seemed to do this more so as a game of who could seem tougher and more intimidating rather than out of animosity. She often initiated positive and friendly interactions with the very same chimpanzees she loved to rile up. In fact, the reason we knew she and Abdul would become good friends was because of how positively they interacted when in neighboring enclosures before their formal introduction.

We deeply admired Iris’ adaptability, strength, and her love for Abdul after all she had been through before her retirement. For a chimpanzee who lived alone and with no access to the outdoors for so long, we are thankful she had the chance to make friends, feel the grass beneath her feet, and express natural chimpanzee behaviors.

We will cherish every memory we have of Iris. One of her caregivers, Skye, describes Iris as a “hidden gem” she felt honored to know and love. Another caregiver, Tracy, remembers her incredible sense of humor and how special it felt to develop a hard-earned friendship with Iris. One of our veterinarians, Dr. Bezner, wrote a blog post about Iris’ transport to the sanctuary titled “Driving Miss Iris.” The nickname Miss Iris stuck and seemed to fit her confident and strong-willed personality perfectly. We all agreed that the extra title of respect suited her.

Iris passed away suddenly due to complications with cardiac disease. Just before she passed, she had made a large nest and napped in it for much of the afternoon. She had been playing with the staff and Abdul only an hour or two before passing. Though the suddenness of her death was painful, we know her last day was filled with comfort, warmth, and friendship – all the things we could ever want her to have. We will forever love and miss you, Miss Iris.

Rescue of Iris the Chimpanzee