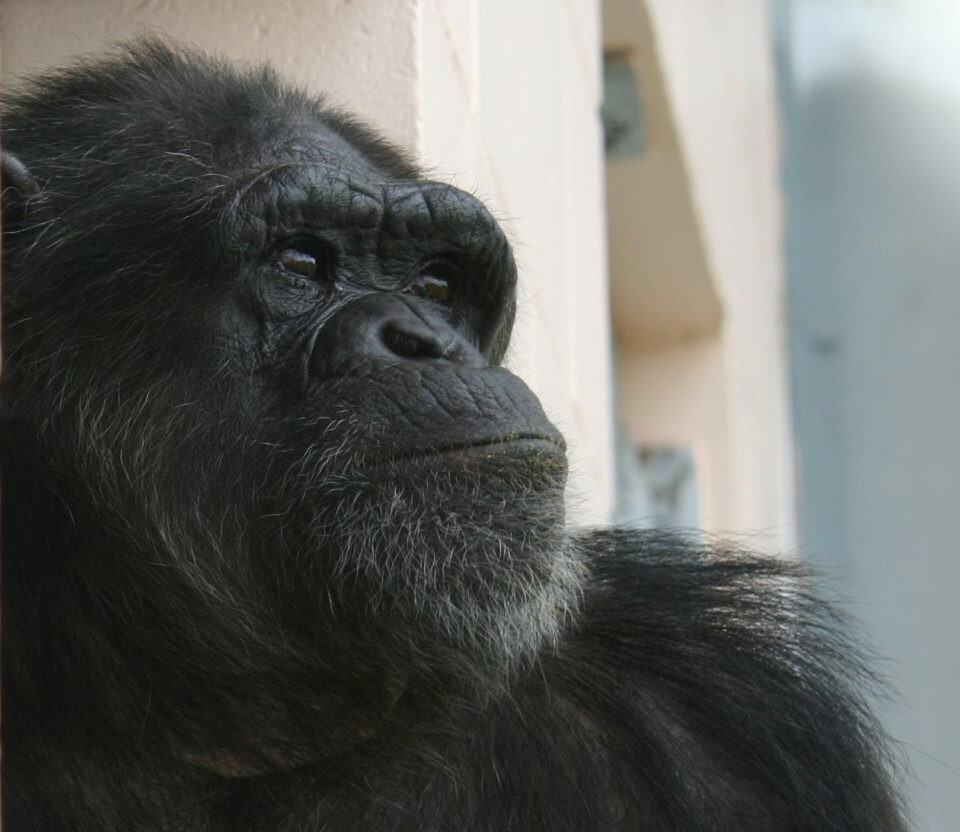 In loving memory of
Hannah

A goodbye to dear, sweet Hannah
Early on a recent morning during breakfast, a call came over the radio we all dread – a chimpanzee had collapsed. As the veterinary team raced to the scene at Doug’s building, a mental list of all the older chimps went through our minds: Emily, Ursula, Mona, Pepsi, Billy, Jennifer, and of course Daisy who has renal disease. We were quite surprised, if not shocked, when we realized it was our sweet Hannah.

Her caregiver, Tedi, had fed an eager Hannah a banana and juice just moments before she collapsed. Despite our best efforts delivering CPR and utilizing a defibrillator, Hannah never regained consciousness. The staff all came to say their goodbyes to Hannah once her chimp family had the opportunity to spend time with her. Through tears and hugs, we discussed how Hannah had been acting over the past several weeks. Did we miss any signs that would have clued us in to the fact that something was wrong?

Another of Hannah’s caregivers, Brooke, mentioned how exceptionally happy and frisky Hannah had been the day before, grateful she had spent extra time with her. During veterinary rounds, Hannah greeted me with her usual enthusiasm and appeared healthy and strong.Everyone seemed to echo the same sentiment; she had been acting like her sweet and happy self, greeting everyone with her trademark puckered-lips smile (as seen in this photo).

Her appetite had been good, especially for the apples she loved so much. In recent days, she had even enjoyed lots of playtime with her daughter Angie and best friend Daisy. Often when a chimp is feeling ill, family members hover around, concerned and worried; Angie is notorious for this. However, in the days leading up to Hannah’s passing, it was life as usual for everyone at Doug’s family.

Before her retirement to Save the Chimps, Hannah was used in research by both the US Air Force and several biomedical research labs. She was born April 26, 1979 at Holloman Air Force Base in New Mexico. Immediately taken at birth from her mother, Lolita, she was raised in the laboratory nursery by humans. Shortly after Hannah’s first birthday, she was transferred to the Center for Disease Control (CDC) in Phoenix, Arizona, to be used in hepatitis studies. She remained there for three years before being returned to Holloman Air Force Base. After only one month, she was transferred to the National Institutes of Health laboratory in Bethesda, Maryland, though her records do not indicate what studies she was involved in while living there. She was once again returned to Holloman Air Force Base at the age of six.

Upon her final return to Holloman, Hannah was introduced to a group of females, including Daisy, who became her closest friend. When Hannah was 19 years old, she was transferred to the nearby Coulston Foundation, a notorious laboratory in Alamogordo, New Mexico, with numerous Animal Welfare Act violations. She remained there until 2001 when she was rescued by Save the Chimps, along with her friend Daisy.

When Hannah arrived at Save the Chimps at 22 years old, she was rocking anxiously and it was apparent that she suffered from psychological trauma. She arrived with an additional 20 “original Air Force chimps” who were released to Save the Chimps following a lawsuit initiated by our founder, Dr. Carole Noon. Hannah, along with her friends Garfield, Dana, Marty, Liza, Emily, and Jennifer – to name a few – were really the beginning of everything we are today. Dr. Noon could not wait to give these chimps what they hadn’t had up until that point: companionship with each other and an enriching environment that allowed them to exhibit natural behaviors. All of the initial introductions went well and the group quickly learned how to live and thrive as a cohesive family. When the door to their island was finally opened, every single one of them made a run for it towards the green, expansive space and their new life; it was simply amazing. Hannah’s anxiety lessened through the years, as sanctuary life transformed her into a confident and playful chimpanzee. Six of Hannah’s original Air Force family members were with her on the day she passed away. She would have turned 36 this month.

Hannah’s death was sudden and unexpected to us, but her autopsy revealed significant heart disease and myocardial fibrosis. These abnormalities precipitated a sudden fatal arrhythmia, causing her to collapse and lose consciousness. When one of our chimpanzee residents passes away, we find comfort in knowing they were no longer alone, had close bonds, enjoyed fresh and wholesome food, and were free to room an island without caging over their head. Sadly, they leave behind a staff that loved them, cared for them every day, and are heartbroken to never see dear friends like Hannah Banana again. Dr. Noon always said, “These chimpanzees are amazing people.” To that we would like to add, “And so are the people who care for them.”

Rest in peace dear, sweet Hannah. You will always be in our hearts.