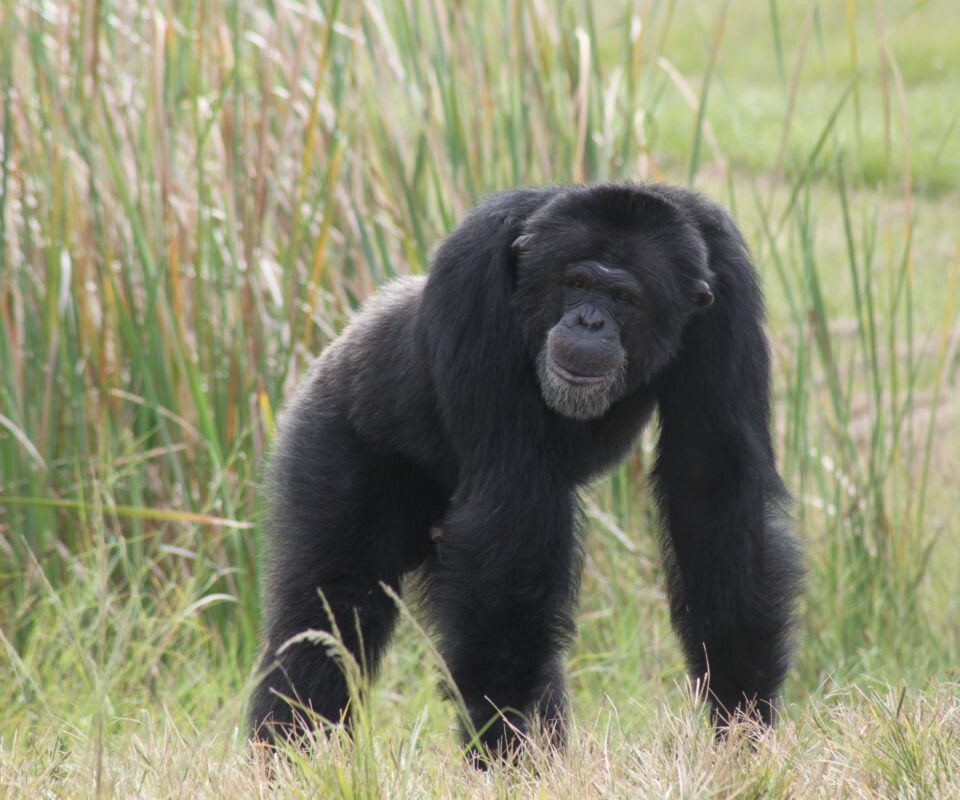 Hello, my name is
Gerro

I was born to parents Montessa and Carlos on May 10, 1998.  As an infant, I was described as “strong.”  My caregivers must have been getting a glimpse of the magnificent adult I would one day become.  Montessa suffered from a prolapse after the birth and had to be anesthetized three times to address the issue.  Fortunately, she accepted me back after each procedure and I remained with her for at least two years before being weaned. Although I received routine physicals and blood draws, I was never assigned to any studies.

When I was young, an older male, Ted, took me and another young male, Spudnut, under his wing and was like a grandfather to both of us.  Like typical young boys, we would frequently find ourselves in trouble with the group and Ted would always be there to defend us.  As Ted began to show signs of old age, I was especially attentive to him. I would stay by his side and wait for him to move from one room to the next. I would also patiently watch while Ted received goodies to entice him to take his medications, never interfering or trying to take the treats. Over the years, the relationship between Spudnut and me has had a natural ebb and flow. Although we have had our differences, when it comes down to it, our long friendship triumphs over those troubles.

Our trio was also close with two females, Beth and Lauryl who were best friends. Beth was especially protective of us. During meal times, she would insist her family of five eat together in the same room. No matter how big we got, Beth would always jump in to defend us when we were being mischievous. As Beth’s health began to fail, she found comfort in Spudnut and me. Once again, I set aside my image of being big and tough while I spent time with Beth.

My father, Carlos, was the alpha of his group and I have followed in his footsteps. I am currently the alpha of my group, a position I took when I was still rather young and maybe lacked the life experience and confidence needed to lead a large group. I would enter a room with a huge display to remind everyone who I was. Eventually with age came maturity and with experience came wisdom. I have grown from an immature, insecure boy into a strong, graceful leader like my father. Managing the dynamics of this group of rowdy males and smart females takes skill and I’m definitely up to the task.

The transformation into being a remarkable leader has been an amazing journey and now I am taking the next step as I prepare the next generation for leadership. The baby of the group, Leo, is my protégé. Leo idolizes me and in the early stages of this mentorship, we frequently spent our days swaggering across the island together. We slept next to each other at night, dreaming of the wonderful possibilities the next day would bring. If I ever needed to redirect Leo or in any way showed disapproval of his actions, he would be devastated. Eventually, like most young males, Leo began to challenge me for the top spot in the hierarchy. For now, at least, I’m holding on to my position. Although Leo is adored by his family, he is not yet ready to take on the role of leader and the majority of the group continues to support him.  As a savvy leader, I recognize Leo’s rising status and keep a close eye on him.

Growing up in the lab can mean missing the rich experience of being raised by your family.  I was fortunate that Save the Chimps was able to provide me with many of those missed opportunities while I was still young. I live life to the fullest!