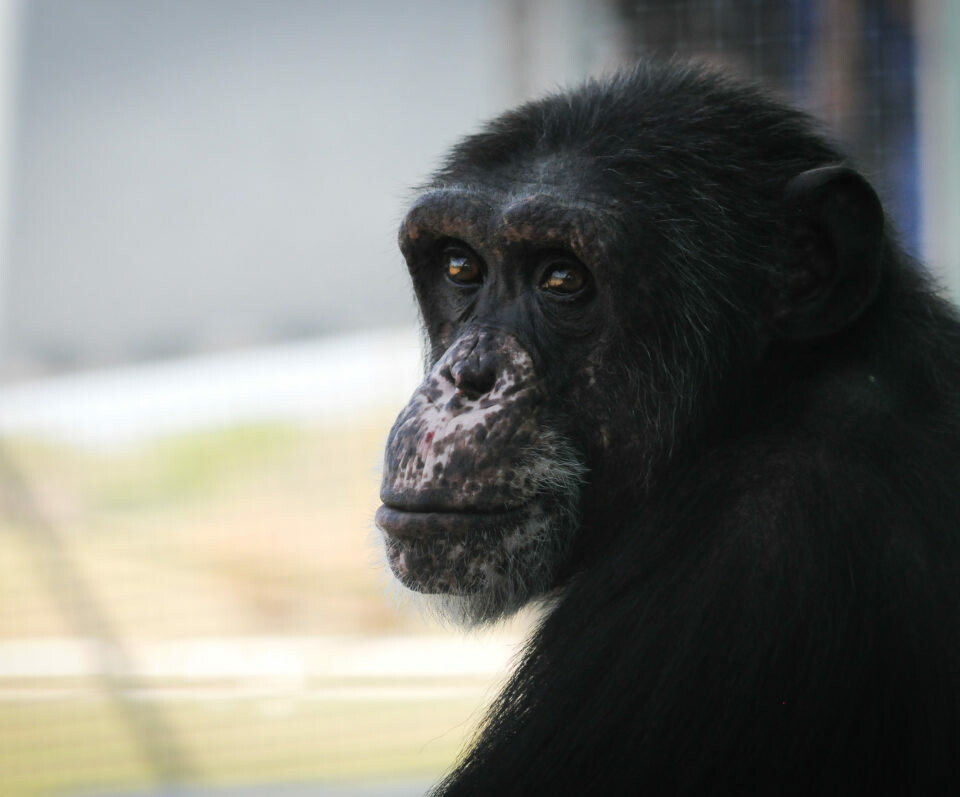 Hello, my name is
Doc

I was born December 27, 1983 at The Coulston Foundation, a biomedical laboratory in Alamogordo, NM. My parents were named Tami and Rufus, but I never met either of them. My mom showed signs of having a difficult birth, so I was delivered by C-section. I was not breathing when I was born, but was revived and sent to the laboratory nursery.

I lived in the nursery with other young chimps until I was just shy of two years old. In November 1985, I began what would be eleven difficult years as a biomedical research subject. During those eleven years, I was assigned to seven different biomedical research studies. I was anesthetized at least 175 times. My liver was biopsied at least 29 times. My lymph nodes were also biopsied, and I developed an infection at the surgical site.

During one study, I was darted with anesthetic 15 days in a row; since anesthesia requires the withholding of food, I barely ate for two weeks. This study involved the repeated infusion of an experimental drug. The drug eventually approved for human use due to its presumed safety in chimpanzees, but later recalled because it resulted in the deaths of some patients. During these studies I lived in isolation; in between studies I spent just very brief periods of time with one other male chimp.

When I was four years old, I was prescribed a sedative for a “behavioral disorder.” Although it’s hardly surprising that a young chimp who suffered repeated fear and trauma should experience psychological or behavioral problems, the nature of this disorder was never described, and was never mentioned again.

From 1997 until 2002, I was no longer used as a research subject, although I was “knocked down” regularly for physicals. I lived alone in a building Save the Chimps called “The Dungeon,” which is where I was found when Save the Chimps rescued me in 2002. The Coulston Foundation, suffering bankruptcy, turned over the entire laboratory to Save the Chimps. I was living in a small concrete cell, and from the day I was rescued, no effort was spared to improve my life. My handsome face and charming personality soon endeared me to my new caregivers. Incredibly, after so many years of suffering, I appeared to bear humans no ill will.

There were no doors between the cells of “The Dungeon”, and thus no way to introduce the chimps living there to each other. Save the Chimps arranged to cut doorways in the six inches of concrete. When I had the opportunity to go through the doors, I first climbed through the door, walked across the narrow cell, and climbed through the second door. But then I assessed the situation, and realized all of this climbing and walking was unnecessary. I began to leap from doorway to doorway, never touching the ground—a moment Save the Chimps caught on film.

Those were the first leaps of faith that I had to take, but they certainly weren’t the last. After years of isolation and little contact with other chimpanzees, I began introductions to join a family group. I was friendly and good-natured, but it still took some time to find just the right family. I eventually joined Seve’s Family, and made the cross-country journey to Florida where I was released onto a spacious island home with my chimpanzee companions. Never before had I seen grass, or felt the natural earth beneath my feet. It didn’t take me long to embrace my new found freedom.