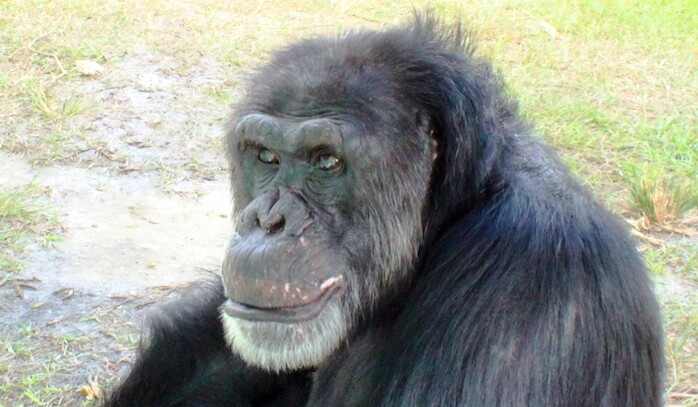 In loving memory of
Dalton

Although certainly a beloved and well-remembered chimpanzee, much of Dalton’s early life is unknown to us. His birth year is estimated, and there is a possibility that he was born in Africa, but we will never know for sure due to a lack of early life documentation.

His recorded history begins in 1977 when he was used in a medical research project at the National Institute of Health (NIH). He was then used for two other medical experiments at the NIH before being transferred to the Holloman Air Force Base in New Mexico in 1979.

While at the Holloman Air Force Base, Dalton was used in multiple invasive biomedical research protocols. These protocols were gruesome and inhumane, ranging from the injection of foreign substances into his lungs to liver biopsies. In between these protocols, Dalton was forced to breed with other chimpanzees, leading him to eventually father 16 chimpanzees.

However, Dalton never got to spend time with his children while he was in captivity, nor did he spend more than a few days or weeks with the females he was forced to mate with. Dalton was withheld from other male chimpanzees, a factor that would affect him for the rest of his life.

In 1997, the Holloman Air Force Base handed their chimpanzees over to The Coulston Foundation, a then primate research lab based in the same area as the Holloman Air Force Base. Dalton suffered a few more years there before The Coulston Foundation sold their land and gave their chimpanzees to our organization on September 16, 2002, due to their bankruptcy and a long list of welfare violations.

We cut doors into the concrete walls that the chimpanzees were confined in so that they could socialize, and one of Dalton’s first companions was a serene female chimp named Tanya. As time passed, Dalton’s family grew to include more and more females. He grew a great affinity for a female chimpanzee in his family named Gabriella, as well as for her baby boy, Gabe. Eventually, males were added to the family, and although Dalton was apprehensive at first due to his lack of interaction with male chimps, he grew to accept the presence of these males in his family.

Dalton moved to our island sanctuary in Florida in 2008, where he was finally able to sunbathe, run, climb, forage, and enjoy the beauty of nature. He never let life slow him down, even with his bad knee, and he would often race in and out for his meals in order to spend more time outdoors.

On October 9, 2014, Dalton passed away from suspected heart failure. Although he may now be physically gone, his spirit lingers on in the warm island breeze and in the hearts of everyone he touched. After years of horrid experiments and treatment, he was able to live out his last years in the company of all of his favorite things and people. To allow us to continue providing better lives for chimps like Dalton, please consider donating to our cause.  Donate In Dalton’s Memory.