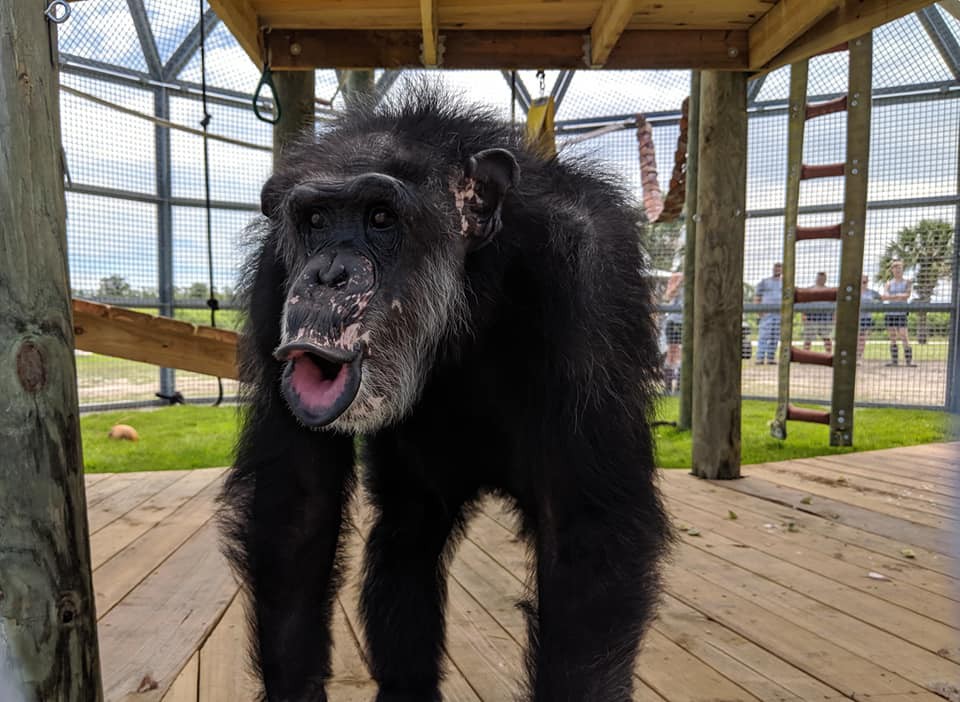 Hello, my name is
Cartier

I was born in the wild and captured to be sent to the United States for use in a medical laboratory. I’m estimated to have been born in 1972 but my files are a bit confusing and hard to follow. Paperwork documenting my purchase in 1979 by Holloman Air Force Base from a supplier of chimpanzees in Pennsylvania describes me as an “adult.” A seven-year-old girl certainly cannot be considered an adult. It appears I was returned to Buckshire after ten months only to be returned to White Sands Research Center two years later. To further confuse matters, I was also known as Evelyn and at some point, my name changed to Cartier.

Upon arrival at Holloman Air Force Base, I immediately began weekly blood draws and monthly liver biopsies. After that my file contains very little information, only documentation of routine physicals with few details added. Although there is no mention of it in her file, I did give birth to one son, Apollo. He was taken from me after twelve hours and sent to the nursery to be raised by humans.

I was among the 266 chimpanzees rescued from the Coulston Foundation in 2002.  My best friend, Yvette, and I joined Seve’s family and moved to our home at Save the Chimps in Fort Pierce, FL. As two older ladies in a group of rambunctious boys, we play together and enjoy each other’s company. I was also reunited with my son, Apollo and although we may not know we are mother and son, we do share a bond. I adore him and pay special attention to him. I greet my caregivers by shaking my head back and forth. The more strongly I feel about something or someone, the quicker I move my head. I am a strong-willed woman, and once I’ve made up my mind about someone or something, it’s difficult to get me to change. When I accept someone, I’m very devoted and will greet them with a very enthusiastic hello. I love my island and can often be found napping in my favorite spot in the warm sun. After all of the moving back and forth in my early years, I’ve finally found my home in sunny Florida with a family who loves me and a son to look after.