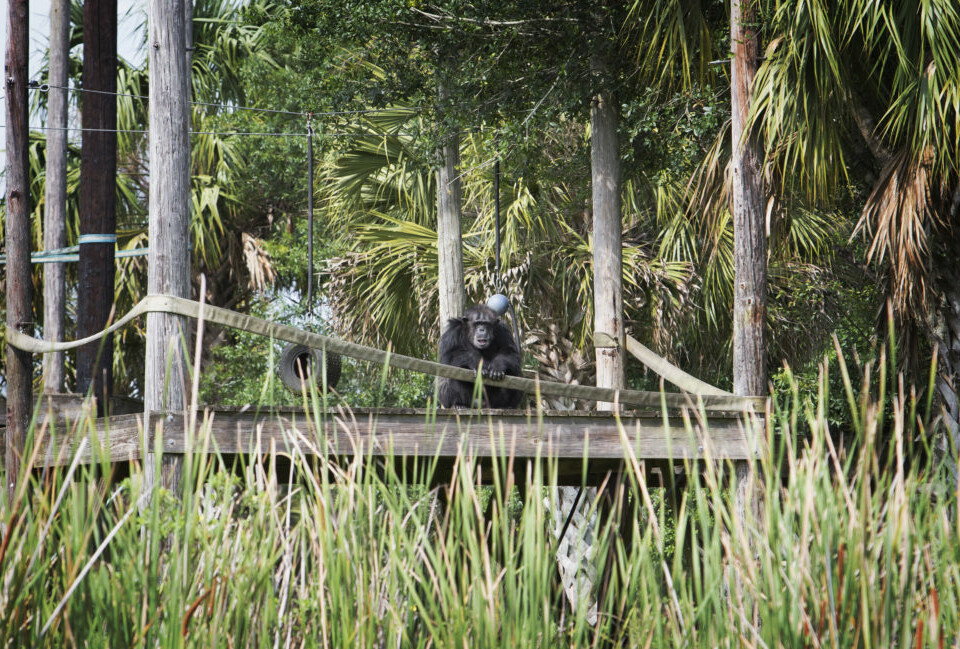 Hello, my name is
Bam Bam

I was born June 16, 1988 to parents Linda and Tarzan. Although Linda was a good mother, I was taken from her and sent to the nursery at three days old. This is much sooner than the five years baby chimps nurse in the wild plus the many years after that they spend with their mothers learning how to care for younger siblings and being part of a family. At two months old I was placed in an isolate for a week with oxygen and treated with antibiotics after a severe episode of wheezing and difficulty breathing. A few months later I had a fever which lasted for several days. In between these illnesses I was part of an x-ray measuring study that required receiving ketamine six to eight times per year. At approximately two and a half years old I was sent to Bioqual, a lab in Maryland. Immediately upon arrival, I began having weekly blood draws. A couple months later I stopped breathing and my lips turned purple. Thankfully I began breathing again when I was turned upside down. While at Bioqual, I was placed on a respiratory study which required nasal swabs every three days for six weeks. During physicals done when I was approximately eight years old I was described as lethargic, droopy, and small for my age. Fortunately as I got older my health improved. When Save the Chimps took over the Coulston Foundation they found me sharing a tiny cage with Spike, another male approximately my age. We had been confined by the same brick walls day after day.

It’s hard to believe such a sickly child turned into the strong and robust adult I am today. These days I spends my time with my family roaming the island in the Florida sun. I greet my caregivers with an enthusiastic smile every morning and am always up for a game of chase. I am a peacekeeper in my group and when disputes break out, I can be counted on to help sort out the situation. I love my human family just as much as my chimp family. The difficult memories of my childhood seem to have faded as I greet each day with a zest for life while looking forward to a future of freedom and joy.