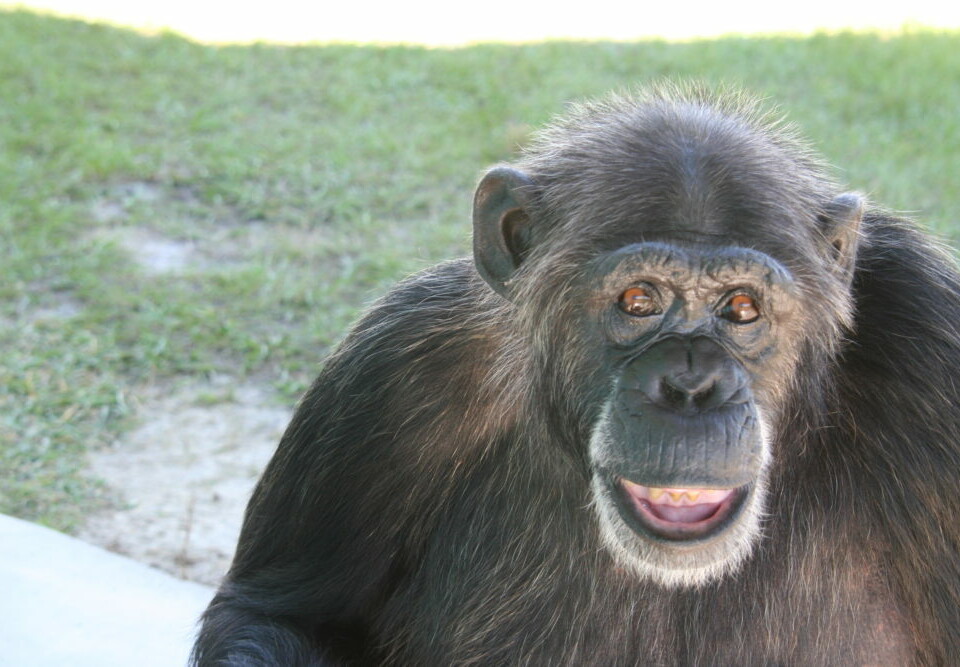 Hello, my name is
April

I was born on April 29, 1979 to my parents Debbie and Adam. My mother was a former circus chimp; my father’s origins are unknown, but he was a very large chimp who was used as a breeder male in the entertainment and pet trade in the 1970s. I was taken from my mother soon after birth and was raised by my human “owner.” I was a pet as well as an entertainer, and appeared in a TV movie entitled “The Wild and the Free.” Like all chimps, I became too strong to handle safely.

My owners inevitably realized that I, and their two other pet chimps, Pepsi and September, needed a safe, secure permanent home. Save the Chimps rescued us in March 2002. At first, we found it very challenging to live with other chimps – even each other.

At first I found it very difficult adjusting to living in a large chimpanzee family – which is true of many pet chimps. Save the Chimps was committed to helping me make the transition from the human world to the chimp world – while at the same time letting me set my own pace and limits. Thankfully, I found a friend and companion in Ron – a big, gentle chimp rescued from the Coulston Foundation, who sadly has since passed away. Then I had the opportunity to foster an infant chimpanzee, Melody, and am a loving mother to her. Over time, I became more sociable and my group grew and grew, and today I live with more than 20 other chimpanzees, including three former pet chimpanzees like myself.

April has begun to mellow as she has aged. In her younger days, she was usually the one stirring up trouble. Nowadays, she seems to sit back and let the up and coming hooligans in the group take on this role. One thing for sure, whether it’s relaxing by herself, or spending time with carefully chosen friends, she is living life on her terms and no one does this better than April.

To learn more about this very beautiful lady and help support her, adopt April today.

Get to Know April