During a week-long rescue from March 4-March 10, 2011 that stretched from New Mexico to Texas to Florida and back again, Save the Chimps became home to twelve chimpanzees who had been used in research, entertainment, or the pet trade. Among the twelve chimps rescued are eight former research  chimps, Stu, Mona, Andrea, Ursula, Tina, Late, Kayla, Katherine, and Katina, two former circus chimps, Wally and Mandingo, and one former pet chimp, Kaleb.

All of the chimps except Kaleb were residents of Wild Animal Orphanage (WAO), a facility in San Antonio, Texas that was home to several species—chimps, monkeys, big cats, wolf-dogs, and bears— who had once been used as research subjects, household pets, or in the entertainment industry before being acquired by WAO. Last fall, WAO filed for bankruptcy and the WAO Board of Directors announced it was dissolving the organization and seeking placement for all of its residents. After consultation with representatives of WAO and careful consideration of our available space and resources, Save the Chimps was pleased to offer a new home to eleven WAO chimpanzees, who became known as the “Texas Eleven”.

The Texas Eleven quickly became the “Texas Twelve” after we also agreed to provide a home to a
pet chimp living near Austin, TX, and plans were made to pick up and transport the chimps in our
Great Chimpanzee Migration  trailer.

Stu, Mona, Andrea, and Ursula are all quite elderly (Stu is probably in his 50s, but may be as old as 62!), so the decision was made to first transport them directly to Florida. The remaining chimps would be picked up on the return trip and brought to STC in Alamogordo, NM, where they would be introduced to other chimpanzees before making their final journey to Florida. On March 4, STC and WAO staff secured Stu, Mona, Andrea, and Ursula into the migration trailer; the terrain at WAO did not permit passage of our trailer to the chimps’ building, so the chimps had the unusual experience of being driven to the trailer on a forklift!

After a 24 hour drive, the chimps arrived at Save the Chimps the afternoon of March 5th, and the next day Stu, Mona, Andrea, and Ursula set foot on their island home.
They have relished the hills and wide open spaces. In fact, Ursula is often seen climbing in the small oak tree on her island!

After a short break, STC staff hit the road back to Texas to complete their rescue mission. Early on March 9th, we picked up Kaleb, a handsome 22 year old male, and then made our way back to WAO. After a hard day’s work by STC and WAO employees (during which Kaleb enjoyed being spoiled with snacks and juice boxes while he patiently waited), the remaining seven chimps were settled into the trailer for the ten-hour journey to New Mexico. Everyone arrived safe and sound, and are slowly but surely settling into their new routine. Soon the chimps will be making new friends as we introduce them into a larger chimpanzee family.

Then, later this summer, it will be back on the trailer for one final journey
—this time to their island paradise in Florida! 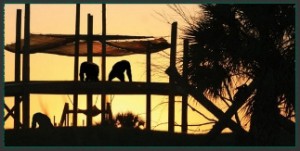 Save the Chimps is currently home to 284 chimpanzees, and is
the world’s largest chimpanzee sanctuary. 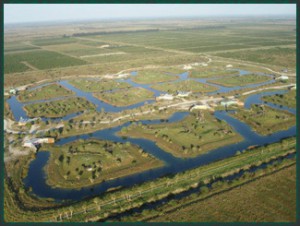 323 chimpanzees have found sanctuary here since the late Dr. Carole Noon founded Save the Chimps and welcomed the first 21 chimpanzees in 2001.

Please help us provide the lifetime of high quality care the Texas Twelve deserve by making a donation to Save the Chimps today!

It is only because of you that we are able to welcome other chimpanzees to
Save the Chimps.

Thank you for your compassion and support.