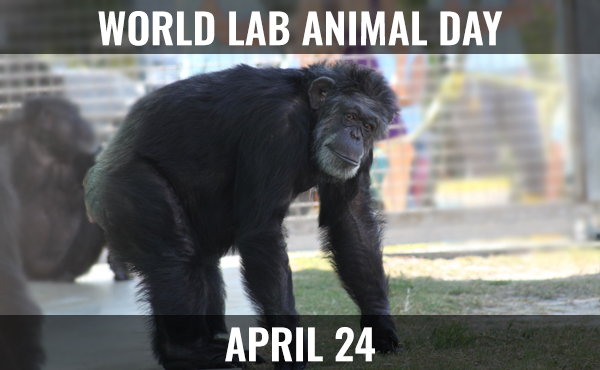 April 24th is World Lab Animal Day, a time for us to remember our residents’ past and celebrate their future.

Many of our beloved chimpanzee residents were retired from laboratories. In honor of World Lab Animal Day, we would like to share some of the greatest moments we have experienced at Save the Chimps with you: the moments that we were able to open the doors to their new 3-acre island homes for the first time.

Many of our residents spent years, even decades, inside laboratories. The vast majority of the chimps in our care came from a lab called the Coulston Foundation, which was notorious for its extensive Animal Welfare Act violations and eventually came to the verge of bankruptcy due to their loss of government funding. When we entered the Coulston Foundation for the first time, many of the chimpanzees were living alone in windowless cages without any outdoor access.

Once the chimps arrived to our Florida sanctuary, we were never able to fully predict how they would react to suddenly having the freedom to walk outdoors and leave their cages behind. Most of the chimps living in the Coulston Foundation had never set foot on anything but concrete and steel. They had never seen grass, and at first many were quite apprehensive to touch this foreign substance.

Moesha, who was once a shy and timid chimp, surprised us all when she immediately explored her family’s island, even climbing to the top of the structures, taking in the view of the surrounding islands. Jack took full advantage of finally having room to run, and sprinted across his new island home. When Rufus was first released onto his island in Florida, he walked out a short distance and then started screaming in excitement and nervousness. He turned around and beckoned his family to join him, hugging as many of the other chimps as he could, asking them to join him in exploring the island. He wouldn’t go out alone, but with the support of his family, he happily ventured out into the Florida sunshine. Some chimps took longer to adapt to the feeling of wide open spaces. Teá was a bit wide-eyed and unsure about it all and stayed close to the entrance to her indoor area with her friend, Ryan. Over time Ryan and Teá decided to bravely venture out and embrace island life with their family.

Take a look at this video compilation of our residents going outside, many for the first time in their lives >> 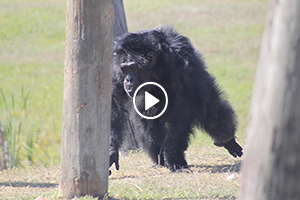 Each milestone our chimpanzee residents experience is made possible by our supporters. Thank you for all you do to ensure our beloved residents enjoy the retirement they deserve.