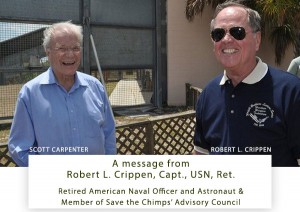 On Veterans Day, we remember those who have served our country.

I commend all who have made the choice to serve in order to ensure the best possible future for our country.

I count the United States Air Force chimpanzees as service members. Their service dates back to the beginnings of the space age when they were used in research evaluating the physical effects of space travel on the body.

Without them, space travel for the first human astronauts would have come with even greater risk. As pilot on the first Space Shuttle mission, I fully understand the risks and rewards of being first. The Air Force chimpanzees experienced much risk without any reward. In fact, these chimps faced compulsory participation in biomedical research when their involvement was deemed as no longer required for the space program.

In 2001, 21 Air Force chimpanzees, who were either survivors or descendants of the chimps captured in Africa for the space program, arrived as the first residents of Save the Chimps. The photo above is from my visit to the sanctuary in 2009, along with the late Scott Carpenter, who was the second American to orbit the Earth and fourth American in space. Together, we paid tribute to the chimps who paved the way for us.

Today, I remember all the Air Force chimpanzees who served, including the seven of the original 21 who remain at Save the Chimps. I invite you to do the same. Thank you.

Click here to learn more about the remaining Air Force chimps at the sanctuary.