When you meet that special person, sparks fly, you get a glint in your eye and a skip in your step — you just know that’s the one for you! That’s how it was recently when Tootie met Lisa Marie. Just like their human cousins, chimpanzees are deeply social creatures. We have 12 vibrant chimpanzee families living on their own islands. Finding chimps that get along, share temperaments, and can live together in a harmonized family unit is the strategic and collaborative effort of the Behavior, Chimp Care, and Veterinary departments here at the Sanctuary. As such, the introduction process is carefully approached and evaluated with the goal of finding relationships that are well-balanced and healthy for all involved. 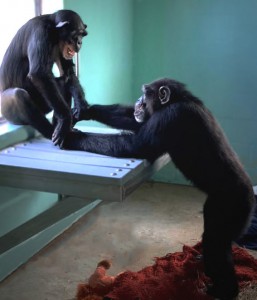 Tootie came to Save the Chimps in 2016 after a bit of a rocky start in life, first as a TV movie star where a fearful trainer had all his teeth pulled, he was then sold to a breeder who put him in a cage with an older aggressive female who bit him repeatedly and then went to a farm where he was safe but lived without the companionship of fellow chimpanzees. When he first came to Save the Chimps it was apparent what a highly playful fellow he was, even though he was a bit shy socially with other chimps. He was introduced first to Joe, and eventually found his place in a group with Garrey, Geraldine, Millie, and Walden and lived happily with them in a small family group as he acclimated to life with other chimps and life at the Sanctuary.

Lisa Marie came to Save the Chimps in 2014 at the age of eight after a short career in entertainment (as a sidekick to an Elvis impersonator) and fairly quickly was introduced to Kiley’s family, and after an adjustment period, loved it with her new chimpanzee family on her permanent island home. Lisa Marie is known for her affectionate and playful manner. She hugs Ariel and plays often with Angie, Cookie and the other members of her family.

The Behavior Department was eager to find the right island family for Tootie. It was determined that Kiley’s family might be a good fit for this playful albeit wary guy. Introductions were started, and Tootie did well one-on-one with a few of the chimps and even had a few adventures out on Kiley’s island but it can be intimidating being the newcomer in a new environment within an established family group. Inevitably, Tootie would return to hang out with Walden with whom he felt the most safe. And while Walden was always patient with Tootie, Walden has his own BFF—Virgil—with whom he prefers to hang one-on-one, leaving Tootie feeling like a bit of a third wheel.

Tootie just didn’t have “his” own one-on-one companion – his own BFF. That is, until Tootie was introduced to Lisa Marie. As soon as the door was opened between these two, the laughter and playing started and continued non-stop, for days. “Being the previous newcomer to Kiley’s group, we had a feeling that Lisa Marie might help Tootie make the transition into the family unit but we didn’t expect the level of affection and love they clearly have for each other,” said Behavior & Welfare Manager Amanda Bania.

Tootie continues to be slowly introduced to members of Kiley’s family and to island life, but his confidence has grown, and he seems to feel much more at home with Lisa Marie by his side. Big pant-hoot and hooray’s to the care staff at Kiley’s Island and our thoughtful Behavior staff who continue to be flexible and patient as Tootie feels more and more comfortable getting to know his new chimpanzee family on his permanent island home.