It’s hard to believe that Terry has been part of the Save the Chimps family for over a year already! He has certainly experienced a lot of changes over the past year—and we look forward to more changes in the coming year. 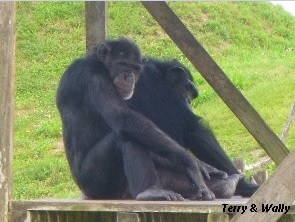 When Terry first arrived, he was very afraid of other chimpanzees. He didn’t seem to understand how to speak chimpanzee, and was frightened when sweet J.R. reached out a hand of friendship to him. Thanks to another chimpanzee, Indie, Terry became comfortable around other chimps and now counts five other chimpanzees among his friends and companions: Indie, Cayenne, J.R., Pam, and Wally. Wally has become one of Terry’s very best friends. Terry always greets Wally with a big bear hug, and loves spending time out on the island with his buddy. 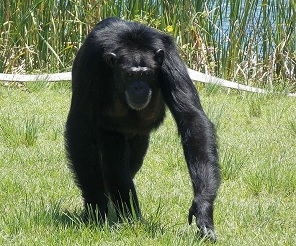 Terry is very communicative with his caregivers and is very clear about his likes and dislikes. His favorite food these days is oranges—he can’t get enough! If he is offered something he doesn’t like, he does overreact just a little bit. He will swat his hand towards his caregiver and make an alarm call. This loud, sharp cry is supposed to be reserved for things that are dangerous, but Terry finds that it is quite an effective means to express his displeasure. He also really enjoys “puzzle feeders,” the hanging enrichment devices that are used to provide the chimpanzees with mental and physical challenges.

Over the next year, we look forward to expanding Terry’s horizons even further. The ultimate goal is to have him join a larger social group, so that he has friends and family aplenty. Given his progress over the past year in learning how to be a chimp, we have high hopes that Terry has an exciting year ahead!

We know that it was Terry’s supporters who helped to get him to Save the Chimps. And with the help of generous supporters like you, we’ll be able to keep our promise to care for him for the rest of his life. We invite you to Adopt Terry or make a donation in honor of Terry’s first year!

Terry, we are so glad you are here, and we look forward to a long and joyful retirement for you at
Save the Chimps. 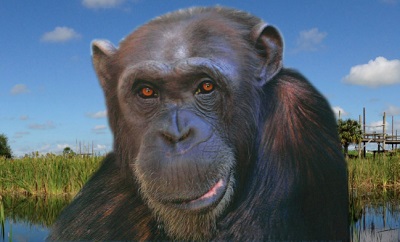