Six Chimps Journey to Florida;
Tropical Storm Emily a No-Show
Marc, Late, Kaleb, Tina, Kayla, and Katina departed for Florida on August 4, 2011 after STC staff spent an anxious 24 hours monitoring Tropical Storm Emily, which was predicted to possibly be hitting Florida at the same time as the chimps’ scheduled arrival. Fortunately, TS Emily dissipated before approaching the Florida coast, and the migration went off without a hitch! The chimps arrived very early in the morning on August 6th. They rested and got their bearings over the weekend. On Monday, Marc, Late, Tina, Kayla, and Katina were released out onto the island for the first time. They were cautious at first and stuck close to the building, but within a half hour, Marc led all of them out to explore the island. When it started to rain, they came back indoors, except for Marc who preferred to stay outdoors enjoying his new-found freedom (until dinner, that is! He does have his priorities, and pasta is one of them.) 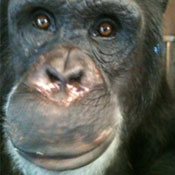 Kaleb, a former pet chimp, often chooses not to come indoors, so we introduced him to four other chimps who “time-share” the island and building with the newly arrived chimps. This way, no matter whose turn it is to be on the island, Kaleb can be out there with them. (We can’t release chimps who are strangers to each other onto an island with each other—we need to know that they are compatible first.) He got along famously with Thoto, Shakey, Millie, and Scarlett, and went out onto the island with them on Tuesday. He was quite bold and immediately began to explore his new surroundings, climbing platforms and running across hills.  Thoto even gave him a big hug, as if he were saying “Welcome home, friend.”  Much to our surprise, Kaleb gave us no trouble about coming back inside at the end of the day. All that running around probably made him quite hungry for his dinner!
Soon these six brave chimps will be joined by the rest of their family: Lisa, Pam, Comet, Tyra, Katherine, Wally, Mandingo, Oliver, Dwight, and Ace.
Stay tuned for news of this upcoming migration!
Thank you to all of our supporters who followed the last migration on  Facebook
Your enthusiasm and comments made it an even more exciting trip!