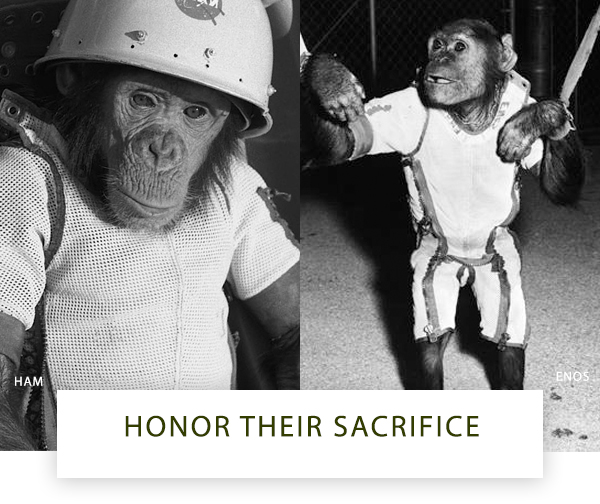 Today marks the 59th anniversary of Ham’s flight into space – let’s honor him by adding Ham and Enos into the U.S. Astronaut Hall of Fame in 2021.

As unwilling participants in the space program, they paved the way for space exploration, yet they remain largely unrecognized.

Sign this petition to urge the Astronaut Scholarship Foundation to add Ham and Enos to the U.S. Astronaut Hall of Fame.

Save the Chimps honors Ham and Enos for their courage, and their unwilling sacrifice. The Space Chimps, or “Astrochimps,” hold a special place in the hearts of everyone at Save the Chimps. It was the plight of the Air Force chimps, the chimpanzees used in the early days of space research, and their descendants, that inspired our late founder Dr. Carole Noon to establish Save the Chimps.

The U.S. Astronaut Hall of Fame (AHOF) opened in 1990 as a place where the accomplishments of astronauts are celebrated and showcased to the public. Located at Kennedy Space Center Visitor Complex, visitors get a glimpse into  space flight through the world’s largest collection of personal astronaut memorabilia. Every year, AHOF honors a class of astronauts that have excelled in their accomplishments in space or in their contributions to the advancement of space exploration. Save the Chimps believes that Ham and Enos deserve to be recognized for their early advancement of space exploration, not because their use in space research is something to celebrate, but because they deserve to be honored for their sacrifices. Learn more and sign the petition

Thank you for your support!