EL PASO, Texas — The creatures, large as human beings, confined inside steel and concrete rattle the bars of their cells like tornados trapped in a cage.

That storm in the midst of the blazing desert comes from two 150-pound chimpanzees that still bear the scars of neglect, abuse, and self-inflicted injuries they suffered during their time as subjects in medical experimentation. 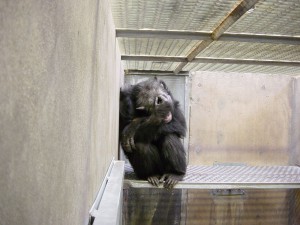 “I would like people to be aware of how chimps are used in laboratories in this country, regardless of how they feel about research I think we owe them something for what we have done to them,” said Jen Feuerstein the sanctuary director for Save the Chimps in the New Mexico area.

Close to the border city of El Paso, Texas and yet unknown to most residents, the Save the Chimps sanctuary in Alamogordo, N.M. serves as the world’s largest rehabilitation center for these animals.

“They lived like humans and interacted with humans only, but once they are too big to be controlled and used, they are suddenly dropped in a cage,” said Feuerstein. Chimps are kidnapped at birth and are trained to perform in the entertainment industry, sold in the pet trade, and in the past even served in the U.S space programs.

Chimpanzees can live 50 years or more, but their stardom only lasts for a limited time, up to 8 years. By that age they have grown powerful enough to overpower an adult human and they become a potential danger to their owners.

The Save the Chimps sanctuary was built on what used to be a biomedical research lab run by Frederick Coulston. The Coulston Foundation (TCF) focused on breeding chimps to be used to test cures for human diseases and other procedures that in many occasions violated the Animal Welfare Act.

“There was no record of Chimps receiving adequate pain medication after surgeries; the only record we found was one Chimp who received children’s Tylenol after back surgery, which is outrageous for their size,” said Feuerstein. In a period of five years there were 46 unintended deaths at TCF.  Some chimps even baked to death inside a concrete enclosure at temperatures of over 140°. 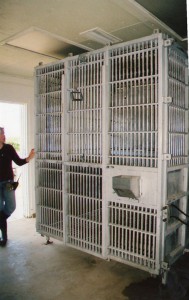 After many years of recurring violations the government finally declined their request for funds and TCF went bankrupt in 2002. At that time some 650 chimps were in their custody.
Dr. Carol Noon, founder of Save the Chimps, and the Arcus Foundation, purchased Coulston’s facilities, rescuing 266 chimps and the government confiscated the rest of the animals. From one day to the next, Save the Chimps became the world’s largest chimp sanctuary.

Most of the chimps left by TCF showed signs of depression and self-inflicted injuries caused by isolation for months at a time inside completely closed cages. “I wish we could give them their freedom but unfortunately this is not possible,” said Feuerstein. The chimps could not function in the wild, she said.

Save the Chimps modified the facility, opening and connecting the cages to make them larger with partial outdoor access and allowing the chimps to socialize. The new treatment also included anti-depressants to help them avoid self-injuries, a well balanced diet with fresh fruits and vegetables. The chimps were spayed or neutered since Save the Chimps doesn’t believe in breeding animals in captivity.

To avoid the risk of chimps being used for biomedical research again, this organization is not government funded. Feuerstein explained, “Most of our donations come from foundations, but we want to expand our individual donor base. We want to get more individuals to donate so that we are not so dependent on foundations.”

Save the Chimps mourns the death of Noon, its president and founder who passed away May 2, 2009, but her great passion and commitment shows in every achievement. “The amazing thing about Carol Noon is she always planned for the worst, and she knew that the sanctuary had to go on if something terrible happens to her … It’s been a sad transition and certainly an emotional one but it’s also been a smooth transition because she was such a good planner” said Feuerstein.

With the help of donations they built a new Sanctuary in Florida consisting of eleven islands connected to a hurricane-proof indoor housing area. Feuerstein mentioned, “It’s really amazing to see the change in the chimps when they leave their cages at the former laboratory and they arrive here at Florida to experience the wide open space … It’s our biggest achievement so far.”

Without a chance to learn basic survival instincts from their parents, chimps become dependent on humans making it impossible to be released back into the wild. Even thought this new sanctuary offers a taste of freedom, the truth is that these chimps will always depend on a human hand to provide basic care.