We’ll always smile when we think of you 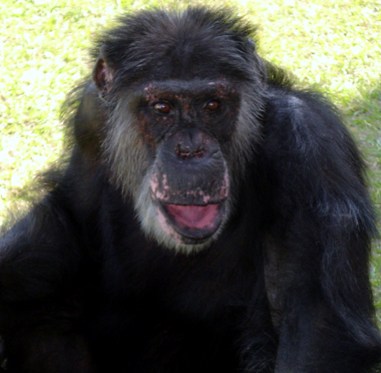 Sometime around 1963 or 1964, a baby chimp was born in Africa.  A couple of years later, hunters shot and killed the baby chimp’s mother, and perhaps other members of his family, and took him from her lifeless body.  The terrified baby was probably put in a cage or crate with other young chimps, and somehow survived a trans-Atlantic journey to the United States.  He ended up in Alamogordo, New Mexico, where he spent the next 35 years in a cage, as a biomedical research subject and breeder. This story is the story of countless elderly chimpanzees living in the United States, including one very remarkable chimpanzee, Wes.  Wes was rescued in 2001 by Save the Chimps, when founder Dr. Carole Noon gained custody of Wes and 20 other Air Force Chimps following a lawsuit.  After nine years in sanctuary, Wes died in the early morning of September 30, 2010, following a sudden stroke. 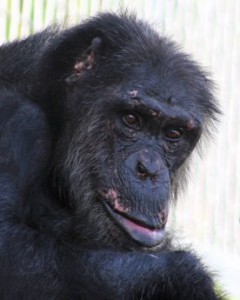 Wes loved to play, and he loved to laugh, and he was always inviting others to join in.  He did so right up until the moments before his stroke.  All it took was a few slaps of his feet on the ground, and you knew he wanted to play a game of chase.  You could wiggle your fingers at him, and he’d wiggle his toes right back.  He loved tickling and wrestling with other chimps, especially youngsters.  He was the perfect lighthearted companion to the more serious Gromek, his best friend for many years.

He never appeared to feel sorry for himself, when he truly had every right to do so.  So when life hands us those proverbial lemons, we should all remember and emulate Wes, and the light and happiness he shared with others.
Even though our goal was to give him a better life, Wes made our world a better place.
Wes is survived by his daughter Kippy and his son Spudnut, both of Save the Chimps,  and seven other children whose locations are unknown. 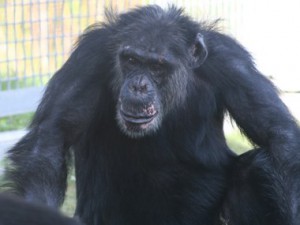 Thank you…all of you…our supporters.
It is your love, compassion and support that has enriched the lives of our beloved chimpanzee family.

Rest in peace, Wes.  We’ll always smile when we think of you.

To Donate in Memory of Wes, please click here. 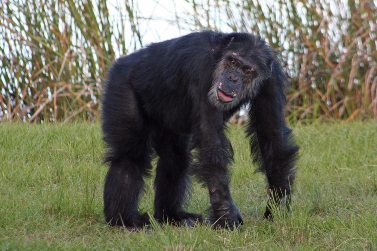 After all that Wes endured in his years of research—biopsies, experimental drugs, blood draws , isolation—Wes still had the courage and grace to be happy and spread that happiness to all who knew him.