Rest in Peace, Carlos, and Be Free 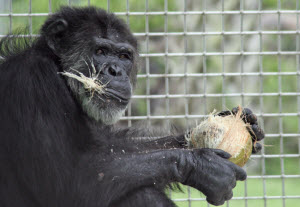 Carlos, the chimp whose image symbolized the misery of laboratory life, and the contrasting hope offered in sanctuary at Save the Chimps, passed away on Friday, March 5, 2010 of heart failure. He was born in Africa in the late 1960s, and was estimated to be 43 years old. He had spent most of his life as a biomedical research subject and breeder, until he was rescued by Save the Chimps in 2002. 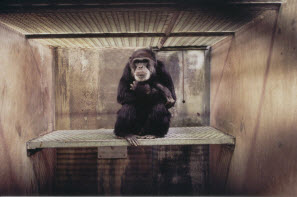 When Save the Chimps’ late founder Dr. Carole Noon first met Carlos, he was living alone in a concrete and steel cell in “The Dungeon” at the former Coulston Foundation laboratory. A photo of Carlos sitting glumly in his desolate cage came to symbolize the experience of so many chimps used in biomedical research. Placed in contrast with the energy, color, and open space of the islands at Save the Chimps in Florida, Carlos’ photo also became one of hope and promise for a better life. But Carlos himself was so much more than a photo. Carlos was an amazing chimp with a larger-than-life personality who captured the hearts of his chimp and human friends alike.  Despite years of cardiac disease, he was full of vigor, and despite his (mistaken) reputation for anti-social behavior, he embraced the opportunity to end his years of loneliness and join a large family of chimpanzees. Although Carlos was actually one of the last chimps to be integrated into his family group, he quickly assumed a leadership role, and his family became known as “Carlos’ Group.”

Carlos was an amazing chimp with a larger-than-life personality who captured the hearts of his chimp and human friends alike. 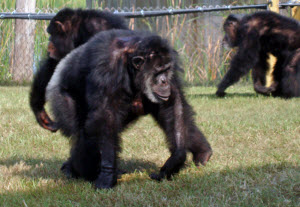 Carlos was also known for his sense of humor, particularly with his caregivers. Perhaps aware of his past reputation for aggression, he delighted in “scaring” us at every opportunity. The game began with Dr. Noon:  when speaking to Carlos during those early days in The Dungeon, she would say, “Don’t scare me, Carlos,” and he would suddenly leap towards the front of the cage, gesturing wildly with his hands. Dr. Noon would feign fear and cry out, and Carlos would smile and laugh—and wait to do it again, always with a knowing gleam in his eye and a grin on his face. The game was passed on to his caregivers, and he never tired of it. 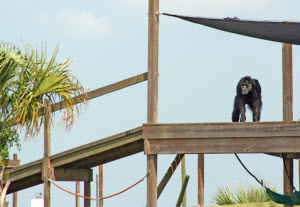 In 2007, Carlos and his family traveled to their new island home in Florida.  When the door was opened, Carlos burst through it and ran to the far reaches of his island. As he made his way out, Dr. Noon announced with joy, “Carlos has left the building!” After exploring his new home, he lay back in the grass, crossed his legs, and gazed up at the bright blue sky. Since then, that image of Carlos at peace in his new home has been the symbol of hope realized, a promise kept. 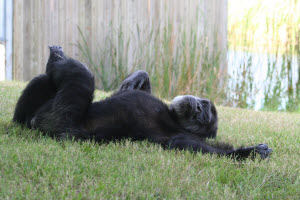 Carlos is survived by several children:  Ana, Arnulfo, Daveeta, Gabe, Gerro, Seve, and Worthy—all of whom share Carlos’ characteristic “big head”, good looks, and charm. He is also survived by his adopted chimpanzee family, and his devoted caregivers. The island that he loved so dearly will always be known as “Carlos’ Island”, and we will always carry his memory in our hearts.

Rest in peace, Carlos, and be free.

To Donate in Honor of Carlos, please click here.

It is because of you, our donors, that Carlos had the chance to know a life without bars, the warmth of the sun
and the love of his family and friends.

Thank you for your compassion and loyal support.