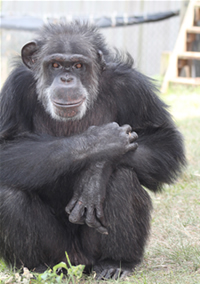 All of us at Save the Chimps are grieving the passing of Sinbad the 1st, who passed away May 18, 2012, of heart failure. Sinbad was a member of Bobby’s Group, and is fondly remembered as a friendly, outgoing chimp who always had a bright smile on his face.

We aren’t sure when or where Sinbad was born. He was most likely born sometime between 1964-1971, possibly in Africa, or possibly to a private breeder. The first record of his existence is a sheet of paper from a lab known as the Buckshire Corporation dated October 16, 1984. Sinbad is described as an adult male who came to Buckshire from a private zoo, and before that was in a private home. It is reasonable to guess that Sinbad was a pet who was sent to a roadside zoo when he became too strong to manage. Perhaps the zoo later closed, or perhaps the zoo sold Sinbad. Either way, Sinbad ended up in a research lab.

On December 28, 1984, Sinbad was sent to The Coulston Foundation, a research lab in Alamogordo, NM. Three days later, he was assigned to his first biomedical research study. For the next 8 months, Sinbad was darted once a week with ketamine to immobilize him for blood draws and liver biopsies. After 8 months passed, his “knock downs” were once per month, until the study finally ended in February 1986. In 1988, Sinbad was assigned to another study in which he was administered an experimental monoclonal antibody that was supposed to target cancer cells. (Since Sinbad did not have cancer, the most likely reason for the study was to test the toxic effects.) For the next two weeks, Sinbad was anesthetized every three days and administered the experimental drug. He became ill right away, and was removed from the study.

In 1992, Sinbad was assigned to yet another study, in which he was anesthetized for five days in a row and administered a “test material” via a stomach tube. When chimps are anesthetized, food must be withheld from them. This means that Sinbad would have had food withheld from him for five days. In the middle of the study, the protocol was changed, and Sinbad had to start over.

Sinbad was a candidate for yet another study in 1995, but it was discovered that he had a heart arrhythmia and he was removed from the protocol. He was never used in research experiments again.  As far as we can tell, he languished alone in a cage in “The Dungeon” for the next seven years.

Everything changed in 2002 when Save the Chimps took over The Coulston Foundation and rescued Sinbad. Incredibly friendly and outgoing despite his years of solitude and boredom, Sinbad quickly charmed his new caregivers. We were sad, however, to see that he had been taught to flip his lower lip down and make a face in order to receive treats or attention. Sinbad soon learned that he would never have to demean himself for food or attention ever again.

Save the Chimps veterinarian Dr. Jocelyn Bezner worked with an ultrasonographer and cardiologist to diagnose Sinbad with cardiomyopathy and administer the proper medications for treatment, so that he could be introduced to a chimpanzee family.

Once the Dungeon was renovated to allow introductions, Sinbad met Whoopi, a sweet but anxious female chimp who was psychologically damaged from her years of isolation. Sinbad fell in love with Whoopi, and the two of them became fast friends.When they were later introduced to other chimps, woe to anyone who dared to upset Whoopi! Sinbad was always her knight in shining armor. With Sinbad by her side, Whoopi’s confidence grew. 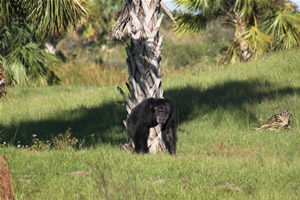 Sinbad and Whoopi became members of Bobby’s family. Sinbad and his friends arrived in Florida on December 16, 2009, where a beautiful island tucked away in the most peaceful corner of the sanctuary awaited them. Sinbad embraced his new-found freedom right away, exploring every inch of the island. He loved climbing the hills and basking in the sunshine. He could almost always be found outside, rain or shine.

This was not the only sign that Sinbad retained memories of his life as a child in a human household. He was particularly fond of getting treats that were in a wrapper, especially gum. In fact, he loved gum and would fly across the room for a piece! He would chew his gum with enthusiasm for a long time, savoring the flavor.One of his caregivers, Torrie, cherishes this memory: 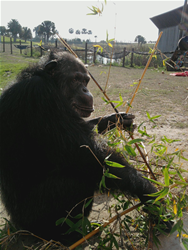 “It was raining very hard one day, and Sinbad was the only chimp out on the island. I had been wearing raingear, but still needed a towel to dry my face and hands when I arrived at the chimps’ building. Sinbad finally decided it was raining too hard, even for him, and came inside. He was watching me dry off, so I dropped a towel for him down the chimps’ food chute. He wiped his face and hands, then used the towel to dry off his back, just like we humans do when coming out of the shower.”

Sinbad is also remembered for his ever-present smile and the light in his eyes. He was always full of happiness and charm. When asked to describe Sinbad, another of his beloved caregivers, Amy, had this to say: “He was perfect.”

On Friday, May 18, Sinbad spent the morning enjoying the beautiful weather on the island with his family. Just before lunch, Sinbad collapsed from heart failure. CPR was performed, and was temporarily successful. The veterinary staff and caregivers maintained a vigil around Sinbad, providing constant monitoring and treatment. Unfortunately, despite our efforts, Sinbad’s heart rhythm never returned to normal, and he passed away later that day. 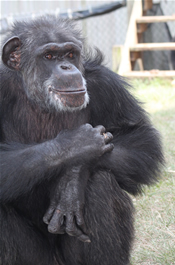 Sinbad, you are so deeply missed, and many tears have been shed over you.
But we need only think of the sweet smile on your face to bring a smile to ours.
Thank you for that gift. Rest in peace. We love you!

IN MEMORY OF SINBAD

Thank you for supporting Save the Chimps and giving our beloved residents the peaceful and dignified retirement they deserve.

We couldn’t do it without you.