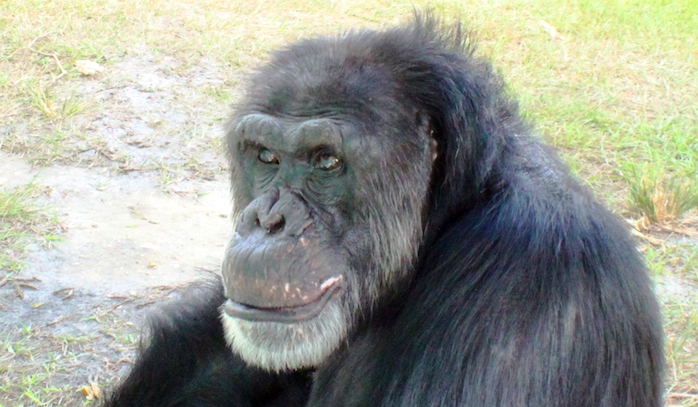 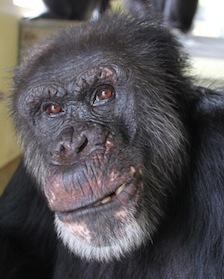 Save the Chimps is saddened to announce that one of our most senior chimpanzees, Dalton, passed away unexpectedly on October 9, 2014 at the estimated age of 46 of suspected heart failure. After several lonely and traumatic decades as a biomedical research subject, Dalton was able to spend his final years in the company of other chimpanzees, enjoying life on a large island in Florida. A member of Tanya’s Family, Dalton was a consummate gentleman, and a father figure to “baby” Gabe. He is deeply missed by his human caregivers and chimpanzee family alike.

Dalton’s date and place of birth are not recorded, but laboratory records place his estimated year of birth as 1968. It is possible that he was born in a forest in Africa, but we will never know for sure. Dalton’s recorded history starts in 1977, when he was used in a medical research project at the NIH. He underwent two other experiments before being transferred to Holloman Air Force Base near Alamogordo, NM in 1979.

At Holloman, Dalton was used in multiple invasive biomedical research protocols. The protocols were varied, involving everything from electro-ejaculation, administration of growth hormone, and injection of foreign substances into his lungs, to liver biopsies and frequent blood draws. In between research protocols, Dalton was used as a breeder, fathering 16 children. Ironically, although Dalton fathered several children, he spent much of his time alone. A female chimp would spend only a few days or weeks with him before being removed. He never encountered any other male chimps. Friendships for Dalton, if formed, were fleeting. 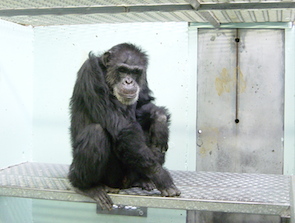 In 1997, the chimpanzees at Holloman Air Force Base were given to The Coulston Foundation, a primate research lab also based in Alamogordo. Coulston had a long history of federal animal welfare violations, and these violations finally caught up to the lab, resulting in cessation of federal grants. Facing bankruptcy, The Coulston Foundation contacted Save the Chimps, and offered to sell the lab and land for 3.7 million dollars and donate the 266 chimpanzees, including Dalton. On September 16, 2002, Dalton’s years as a biomedical research subject came to an end, and a new future opened up for him.

Dalton was living in a building that STC dubbed “The Dungeon,” a drab, barren concrete and steel building that housed 54 chimpanzees, the vast majority of them alone. Doors were cut into the thick concrete walls to allow the chimpanzees to see each other—and meet each other—for the first time. 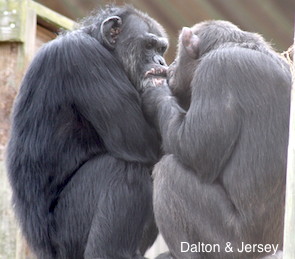 One of Dalton’s first companions was a serene female named Tanya, whom he adored. Little by little, Dalton’s family grew to include Gabriella, her infant son Gabe, and (much to Dalton’s dismay), other male chimps such as Capone and Rupiah. Dalton had never lived with other males before, and wasn’t too happy about the competition at first. But over time, Dalton grew to accept the presence of other males in his family, including Casey, Spike, Sonny, and Worthy. But he was first and foremost a ladies’ man and was never far from one of his girls, be it Heather, Ellie Mae, Salina, Jersey, or his beloved Gabriella.

Dalton moved to Save the Chimps’ Florida sanctuary in 2008, and embraced his new life on his island home. At last he was able to run, climb, forage, sunbathe, and enjoy the beauty of palm trees, blue skies, and green grass. Despite a bad knee that occasionally gave him some trouble, he never let his advancing years slow him down. He loved being outdoors with his chimpanzee family and was often the last to come in for meals, and the first to head back outside after he had eaten. He was always vivacious and full of life. One of his caregivers, Sarah, remembers, “Dalton was a spunky old guy who didn’t let younger males tell him what to do. His energy and presence will be missed by his chimp family and caregivers.”

Dalton is survived by his fellow members of Tanya’s Family, as well as 14 of his 16 biological children: Ariel, Katrina, Sandy, Sinbad, and Yamili of Save the Chimps; Cleopatra and Ruble of the Southwest National Primate Research Center; and Ann, Danny, Gidgette, Goliath, Jill, J.R., and Tessa of the Alamogordo Primate Facility.

Goodbye, Dalton, our charming friend. We love you and promise to always remember you and smile. 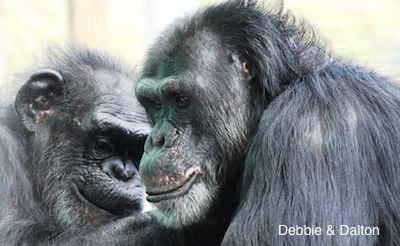