Thanks to Generous Contribution & Staff Ingenuity

Fort Pierce, FL: Save the Chimps, a non-profit sanctuary for retired chimpanzees located in Fort Pierce, Florida has opened its first Primadome™– a geodesic structure designed especially for great apes – to one of the sanctuary’s family groups. This exciting new addition was the result of a true collaboration and group effort: plans for the dome were arranged and oversaw by Save the Chimps Director of Facilities & Project Management Mark Norton; funding was generously donated by the Ronald J. Woods Charitable Trust; and it was assembled on site by Save the Chimps maintenance crew headed by Maintenance Manager Nate Lopresto. In addition, the Center for Great Apes in Wauchula, Florida provided valuable insight from their experience assembling Primadomes™.

“We are thrilled to be able to give our chimps a new play space —  thanks to the generosity of the Woods Charitable Trust– where they can enjoy each other and new experiences, and it is all the more satisfying to have this come to fruition because of such a great team effort,” stated Interim Executive Director Todd Archer, CPA. 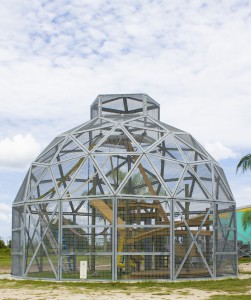 The Primadome™, a prefabricated geodesic dome especially designed to enrich the lives of captive great apes, was developed by Texas construction and building pioneer Allan Brandes in the early 1990s. Since then it has enriched the lives of chimpanzees and orangutans at many sanctuaries, zoos and research facilities around the United States. “These types of vertical spaces, where they have the space to swing, and to climb are very enriching for the chimps, we are very excited to have this new feature in place,” stated Director of Chimpanzee Care Services Dr. Andrew R. Halloran.

Representatives from sanctuary care staff, behavior department, and facilities collaborated on the interior design consisting of feeder boxes, water stations, interchangeable enrichment elements,  ladders, platforms, and ramps. All of which maximize space for climbing, and giving the chimpanzees multiple areas to perch, one of which, the cupola, offers one of the most panoramic views across the sanctuary for chimps. “We really put a lot of thought into what the chimps might like to see and use, and have available, so we provided areas for shade as well as play,” added Facilities Director Mark Norton. The floor of the Primadome™ is made up of both sod and platforms. JPT Sod in Fort Pierce provided a partial in-kind donation of sod for the floor of the Primadome™.

Location Chosen for a Special Purpose 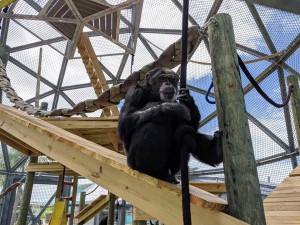 Save the Chimps senior staff elected the family on Seve’s Island to serve as the location for the sanctuary’s first Primadome™ for several reasons. Seve’s Island is the home to an active group of chimpanzees, several of which have special behavioral considerations. One chimp in particular, J.R. and his group of companions, prefer to be away from the larger family group, and enjoy their time together. By locating the Primadome™ on Seve’s Island, J.R. and his intrepid group can have the private time they crave, either on the island or inside playing in the Primadome™. “This structure really allows us the ability to maximize each of the areas for each of the groups, giving J.R. and his smaller group the quiet time away from the larger group,” added Dr. Halloran.

The specific location of where to erect the Primadome™ presented several challenges as well, given that there is a grouping of several mature palms adjacent to the main building on Seve’s Island. Ultimately, the ground staff decided on a spot sixty feet from the main building. As such, a 60 foot custom walkway was constructed to allow for safe transfer of the chimps from the main building to the new structure. “As the main structure was being finalized, the chimps have been introduced to the walkway and they love that space too,” added Mr. Norton.  There are spaces to allow for enrichment in the walkway as well, and plans to add a digital scale to aid in the health monitoring of the chimpanzees.

The sanctuary has conceptual plans for four more Primadomes™ on the grounds. “With the right funding in place, and given our recent in-house experience putting this one together, we can easily give more resident chimps access to such a space,” stated Mr. Archer.

A Legacy of Caring

Since its founding in 1997 by Primatologist Dr. Carole Noon, the sanctuary has successfully retired 333 chimpanzees from unsuitable living conditions, allowing them to live out their days in a safe, secure, and vibrantly social community alongside their fellow chimpanzees. The retired chimps now live in large family groups on 12 separate three-acre islands, where they receive three fresh meals daily, first rate medical care, and a variety of activities in an enriched environment.

Save the Chimps is committed to providing sanctuary and exemplary care to chimpanzees in need. As the world’s largest privately funded sanctuary for chimpanzees, Save the Chimps relies 100% on annual donations from generous groups and individuals. Out of respect for its residents’ privacy, the sanctuary is closed to the public except for two member days each year, the next of which is October 5th, 2019. For more information or to donate your time or treasure, visit savethechimps.org.

Click for photos of the Primadome from start to finish!