…Over 200 chimps now at our Florida sanctuary 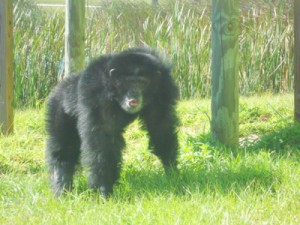 Another chimpanzee family, known as Ragan’s Group, is complete in New Mexico, and the migration of the new family has begun!  The first ten chimpanzees from this group of 26 chimps left New Mexico on November 1 and arrived in Florida on November 3, 2010.  After a day of rest, Spock, Mickey, Mary Jane, Ryan, CJ, Brandy, Freddy, Chrissy, Samantha, and Teá set foot onto their island for the first time on November 5th.  The final moments of their journey were witnessed by some special guests:  Danielle and Lee Wilson, who sponsored this migration, as well as Linda May of the Arcus Foundation, and the Save the Chimps Board of Directors. 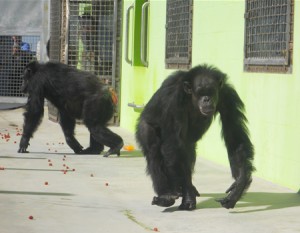 Mary Jane, who was born in Africa, was the first out onto the island.  She repeatedly looked back for her friend Mickey to join her, but Mickey preferred to stay on the patio.  Mary Jane finally lost patience and started exploring on her own.

Spock, also born in Africa, climbed onto the platform adjacent to the patio, but was very suspicious of the grass.  He leaned down to sniff it, and then leapt from the platform back to the patio in order to avoid the grass.  He soon got over his concerns, however, and began exploring further.  Ryan, who didn’t even know how to climb when we first met him due to years of confinement in a research lab, bravely went outdoors but stuck close to the building.

CJ and Brandy, longtime BFFs who were born in the lab, had very different reactions to their new home.  Brandy walked out onto the grass with little hesitation, but CJ took much longer to even go outdoors.  She sat in the doorway and took it all in for quite awhile.  But curiosity won out, as it always does, and she mustered up her courage to step outside.  Mystified by the grass, she was seen gingerly placing her foot onto the earth, and later she stroked the grass gently.

When Samantha was released, she boldly ran out onto the island, surprising us (and maybe even herself!)  Samantha was born at The Coulston Foundation and has never lived without concrete under her feet or bars overhead.  We can only imagine how it felt for her to run at full speed with the grass between her toes!

Freddy, Chrissy, and Teá had all been used in the entertainment industry, and were familiar with grass, trees, and open spaces.  Freddy proved to be the most adventurous, heading out to join Mary Jane on the island.  Chrissy was more interested in the frozen juice and “Chimp-o-ween” treats that had been scattered about.  Teá was a bit wide-eyed and unsure about it all and stayed on the patio with Ryan, Mickey, and CJ.

In the coming weeks, these ten chimps will be joined by the rest of
their chimpanzee family.
Stay tuned for more updates as we get ever closer to completing
The Great Chimpanzee Migration!

There are still over 40 chimps in need of sponsorship.
We can’t do it without YOU.
To sponsor a chimps migration to Florida, click the donate button below:

To view more photos of the Ragans group, click here