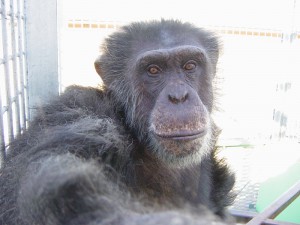 Our dear Spock passed away on the morning of July 2, 2014. Spock was the eldest male in Freddy’s Group, and a beloved friend to both chimpanzees and humans alike. Charming, polite, and kind, he was a noble chimpanzee who is deeply missed. 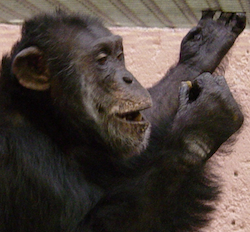 Spock’s date and place of birth are unknown. Laboratory records placed his year of birth as 1974, but he may have been older. All we know for certain is that in 1985, a chimpanzee named Doc was transferred from The Buckshire Corporation in Pennsylvania to The Coulston Foundation, a research laboratory in Alamogordo, NM. Coulston changed Doc’s name to Spock and entered him into the breeding program. Coulston also assigned Spock to biomedical research studies. The studies to which Spock was assigned were highly invasive, some involving daily “knockdowns”, frequent drawing of blood, and delivery of unknown substances into his body via a stomach tube or injections.

In 2002, The Coulston Foundation went bankrupt, and Save the Chimps rescued Spock. He was living alone in a dismal building called “The Dungeon”—but soon all that changed. Spock joined Freddy’s Family, becoming friends with 25 other chimpanzees, young and old, male and female. They moved to Florida and were released onto a spacious island.

Spock loved the outdoors and treasured every moment on the island, basking in the sun, relaxing under a tree, 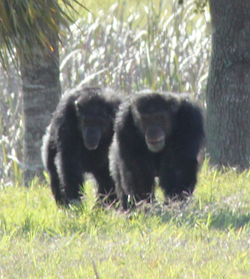 or socializing in the covered bridge.

Earlier this year, Spock began showing signs of advancing heart and kidney failure. Spock received an echocardiogram that revealed a blood clot in his heart. Our veterinarians developed a specialized treatment plan, and Spock’s condition stabilized. Thanks to the efforts of his veterinarians and caregivers, Spock remained bright and active for the final months of his life. His death, though sad for all who knew him, was the kind we wish for all of the chimps residing here—a sudden and peaceful passing on his island home.

Spock’s caregivers’ thoughts about him revolve around how much he was loved. One of his human friends, Glenna, recalls: “Spock was so easygoing, sometimes Cori-Lyn would take advantage of this and steal his food. [Don’t worry—we always have more standing by!] But when he was sick, Cori-Lyn seemed to understand this and never took anything from him. She really cared about him—they all did.” Another of Spock’s caregivers, Teresa, said simply when asked about Spock, “I loved him very much.”

Spock is survived by his three children, Angie, Bart, and Grace, all residents of Save the Chimps.

We will always love and miss you, Spock.

To learn more about how we honored Spock when he passed away, please visit our new photo series: