Thank you Dee Dee for sharing
your sweet, gentle soul with us.

It breaks our hearts to share the loss of beautiful, kind, wonderful Deanna, who passed away as the result of heart and kidney failure on October 17, 2011. Deanna was only 17 years old, so we were shocked and saddened that she developed these serious problems at such a young age. Although the death of any of the chimps causes deep grief and sorrow, the pain of losing a chimp so young is somehow sharper.

Deanna was born on March 29, 1994, to her mother Alison and father Dave at The Coulston Foundation in Alamogordo, NM. Unlike so many chimps born at Coulston, Deanna was not taken from her mother at birth. Instead, Alison raised Deanna for a year, in the company of another female, Montessa, and her infant son, Seve. Two days before Deanna’s first birthday, Alison and Deanna were anesthetized. Alison woke up to find Deanna gone. Deanna woke up without the warm comfort of her mother. According to her records, she was being “weaned for shipment.”

Before Deanna was shipped, she was anesthetized six times for blood draws and a liver biopsy. On December 16, 1995, little Deanna was shipped across the country to a lab called Bioqual in Rockville, MD. There she lived alone, and was used as a biomedical research subject. In 2002, Deanna was sent to MD Anderson Cancer Research Center in Texas. She was still “owned” by The Coulston Foundation (TCF), however. When Save the Chimps took over TCF, she was still living at MD Anderson, but eventually STC was able to bring Deanna home. She returned to Alamogordo, and began the process of socialization into a chimpanzee family.

Deanna became a member of Seve’s Group, and was thus reunited with her companion from so many years before. While we find it unlikely that they recognized each other, Seve and Deanna did have a special bond. Seve sadly suffers from extreme mental anguish; he screams and self-mutilates when distressed. Deanna would comfort and reassure Seve during his troubled moments, when the other chimps would simply avoid him.

Deanna had a playful and light spirit. She loved playing with paper and cardboard, and was known to make skirts out of paper bags. She also enjoyed the softness and comfort of blankets, carrying them with her wherever she went and draping them over bottom. Deanna enjoyed the company of her chimp family, and had a special fondness for Anna and Hunter.

Deanna’s caregiver, Amber, who cared for Deanna both in New Mexico and Florida, and was by Deanna’s side throughout her illness, used these words to describe Deanna: “Sweet, sweet, sweet.”

Thank you, Dee-Dee, for sharing your sweet, gentle soul with us. We love you. 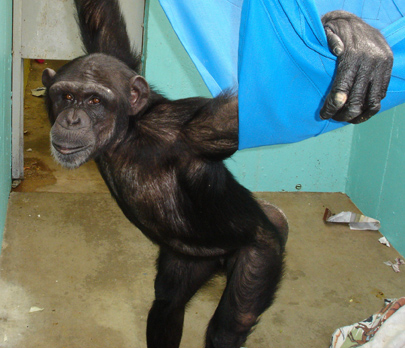 Thank you for enriching the lives of our beloved residents.

Your compassion and generosity makes our work possible.