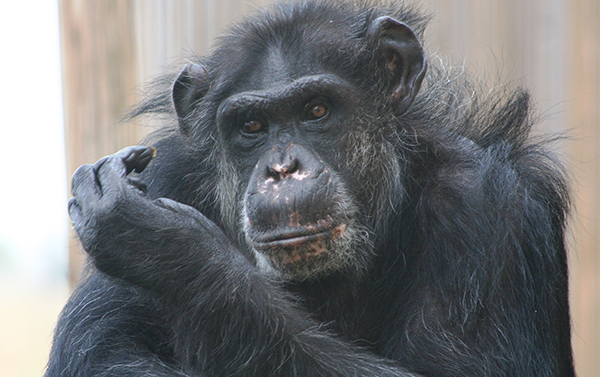 With great sadness we share the passing of Little Rock, a beloved member of our Save the Chimps family. Little Rock’s origins are a mystery, as is how she acquired her name. Her earliest records are from 1981, but she was already an adult by then. Her birthday is an estimate due to the lack of records of her earlier life. She was most likely born sometime between 1962 and 1969, possibly in the wild in Africa. What we do know is she belonged to a pharmaceutical company in Pennsylvania before she was sent to The Coulston Foundation, a research lab in Alamogordo, NM.

During her 20 years at The Coulston Foundation, Little Rock was used both as a breeder and in medical experiments. She had ten children, all of whom were taken from her shortly after birth. For all of those years, Little Rock lived in a steel and concrete cage; she never saw trees or felt the grass under her feet.

Save the Chimps rescued Little Rock in 2002, when The Coulston Foundation went bankrupt and Save the Chimps took custody of their 266 chimpanzees.Little Rock’s new caregiver noticed that she didn’t respond to her name or to sounds and noises like other chimps. Little Rock’s records were thoroughly checked and we found two written notations of her deafness, one recorded in 1998 and one in 2001. There is no information on how long Little Rock had been deaf or what might have caused her hearing loss. Little Rock was so attentive and attuned to her surroundings that it was easy to forget that she was deaf. She always communicated effectively with her human caregivers and other chimps, using gestures and body language as well as vocalizations. 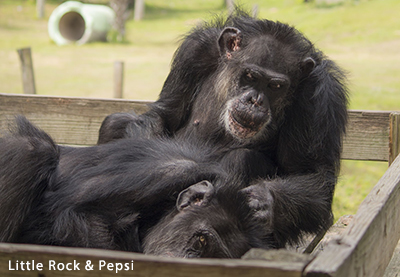 Little Rock lived in a large group of chimps known as “Doug’s Family” and was a beloved member of the group. Together they shared a spacious island home with grass, trees, hills, and platforms. She was a very devoted and loyal chimp. Little Rock was often found with her best friend Tanya, who sadly passed away in 2013. After Tanya’s death, Andrea the Second, the younger of two Andreas in the group, became Little Rock’s new companion, lovingly watching over Little Rock and making sure she was never lonely. Over the years Little Rock also enjoyed friendships with Pepsi, September, Daisy, and Angie.

Although Little Rock was elderly, she had a zest for life. Her determination to overcome adversity and enjoy her retirement to its fullest is something that is easy to admire and remains an inspiration to us all.

Little Rock died from natural causes and will be sorely missed by all who knew her. We find comfort in knowing that she spent the last eighteen years of her life experiencing love and companionship and we thank you, our supporters, for making that possible.

“What we have once enjoyed we can never lose. All that we love deeply becomes a part of us.” -Helen Keller

Rest in peace, Little Rock. We will miss you always.