Dear Save the Chimps Supporter:

Just this summer, we marked the first World Chimpanzee Day, a day set aside to celebrate our closest cousins. We at Save the Chimps have the honor of being part of the community that provides the best possible care as chimps are retired from laboratories, pet trade, and the entertainment industry.

Given their backgrounds, our chimpanzees come to us with various needs and capabilities. We treat our chimps as individuals – meeting them where they are at any moment and walking alongside. Our sanctuary provides the space and care for chimps to live out the rest of their lives in dignity; thus, we understand that loss is part of the very nature of our work, particularly given that nearly 30 percent of our population is elderly. As we do when our chimps pass, we want to honor each by sharing their individual stories. Sadly, we have lost three chimps since April – Iris, Garrey, and Tiffany – to a variety of illnesses. I share here a brief story of each and invite you to visit our website’s Tribute page to read more. 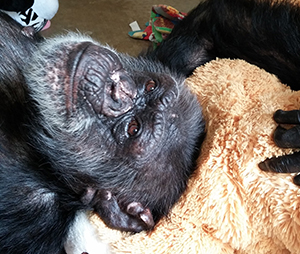 In 2015, Iris came to us after years in isolation at a small, unaccredited zoo. She was quiet upon arrival, but, her initial interest in Abdul, a male chimpanzee in a neighboring enclosure, blossomed into one of the most special relationships we have ever witnessed at the sanctuary.

When Iris joined us, she was pale, with patchy hair and weak legs. We had the joy of watching her gain strength and vitality. However, one day during an introduction, she unexpectedly collapsed. She recovered from what was determined to be cardiac arrest, with a medical evaluation diagnosing heart disease. At 34-years-old, Iris was considered elderly, so we created an environment that was both enriching and safe for her that, of course, included her dear friend Abdul by her side.

Our Miss Iris passed away suddenly due to the complications of cardiac disease. She spent her final day playing with Abdul and staff and taking an afternoon nap in the comfort of a large nest of blankets (one of her favorite things she made for herself). For a chimpanzee who lived alone with no access to the outdoors for so long, we are thankful she had the chance to make friends, feel the grass beneath her feet, and express natural chimpanzee behaviors. Miss Iris continues to be greatly missed, our memories filled with love. 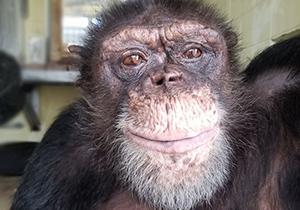 Garrey was among the 266 chimpanzees rescued by Save the Chimps from the Coulston Foundation, a now-defunct laboratory in New Mexico with extensive Animal Welfare Act violations. Despite his previous living conditions, Garrey had a happy and friendly personality. He was a gentle giant known for his kindness and calm nature when meeting new chimpanzees.

Garrey loved spending time on his island home with other members of Bobby’s family, including his great friend Walden.The two of them would spend afternoons grooming each other. However, in 2014, Garrey began to show signs of pain and weakness in his back and legs. An MRI revealed seven collapsed discs, two of which were severely impinging on his spinal cord. Surgery was not an option due to the location of the discs. Even with proper medication to keep him comfortable, mobile, and with his family, we finally made the decision to move him to Special Needs, allowing him to maintain access to the outdoors where he loved to be. Eventually, other members of his family joined him as well, including his best friend Walden. A rambunctious chimp named Tootie also joined the group. Tootie’s games of chase and tickle sessions, which would leave Garrey in fits of laughter, provided Garre-bear with the exercise he needed to stay healthy.

Garrey’s disc disease worsened over the years until he had difficulty moving, playing with his family, and caring for himself. His family was very attentive, with Walden, in particular, grooming Garrey more and more as his health declined. Tests showed that most of his discs were collapsed. We made the hardest choice that anyone can make in a sanctuary setting – to end suffering.

Every chimpanzee who knew Garrey loved him and made sure he knew it. We loved him dearly as well and mourned when we had to let him go at the age of 32. We miss him without measure but know that we made the right decision for our dear friend. 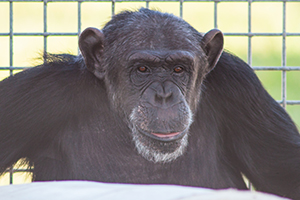 Tiffany arrived at Save the Chimps earlier this year at the age of 13. Before introducing a new chimp to a family, the incoming resident is housed in our Special Needs area while we monitor the chimp’s overall health. Tiffany’s companion throughout was her lifelong friend Tuffy.

Even though she was new to sanctuary, Tiffany readily expressed her spunky nature. When other chimps were too rowdy during her nap, she would speak her mind, vocalizing to tell them to pipe down. While other chimps carry items around in their pouch (the area between the thigh and the abdomen), Tiff liked to show off by carrying them on her shoulder. The staff gave her a purse, just in case she wanted to carry more. She also loved “water based enrichments” including her kiddie pool.

After an early summer cold virus spread among the chimps at the sanctuary, we noticed some concerning health issues in Tiffany, including a decrease in appetite. As she became increasingly ill, our senior care team came together to assess the reasons behind her condition, performing several procedures, such as an MRI, that hopefully would provide important information.

We remained challenged by Tiffany’s case, so we reached out to experts across the country, as well as internationally, for advice and guidance. A diagnosis remained elusive.

We maintained focus on doing what was best for Tiffany, providing the highest level of care to the extent humanly possible. Sometimes, doing the best we can is not enough to change the course of a chimp’s life. Her condition worsened to the point that further diagnostic procedures would only increase her discomfort and decrease her quality of life. The decision was made to end the suffering of our new friend.

We came through this tremendous loss with a mission to find out more about Tiffany’s condition. A comprehensive clinical assessment is being performed at the University of Florida in Gainesville. We await the final report, but the preliminary results tell us that hers was a complex situation with a myriad of challenges, including underlying liver disease. We always seek ways to ensure the best care for our chimps, and the information from this report will advance those efforts.

All of the chimpanzees in our care make deep impressions on our hearts. We understand how much you care about them as well and know that you mourn along with us. Thank you, as always, for the compassion you show toward these amazing beings.

Learn more about how we honor the passing of our beloved residents.