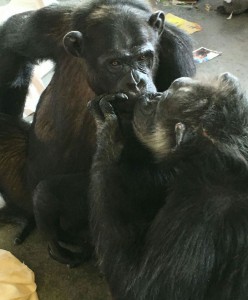 Two of our residents, Terry and Jeannie, have recently captured the hearts of thousands in a video of the two new friends holding hands. In Save the Chimps’ first video to go viral, Terry and Jeannie meet for the first time and immediately bond, affectionately taking each other’s hands and holding on tight! Thanks to the media and our supporters, the video has been an internet sensation, and their story has made news from The Dodo to Good Morning America. The love between Terry and Jeannie continues to grow – check our Facebook page for more pictures and videos of the pair grooming, kissing, and playing.

Terry and Jeannie both did not always have the companionship they needed to thrive. Terry lived in isolation for 18 years in a small zoo, and Jeannie lived in a notorious laboratory, called the Coulston Foundation, with no grass beneath her feet for over 40 years. But now the two now have each other, a family group of chimpanzees, and a peaceful and dignified retirement at Save the Chimps.

Below is a list of media coverage on Terry and Jeannie’s friendship.