In Memory of our Beloved Shakey 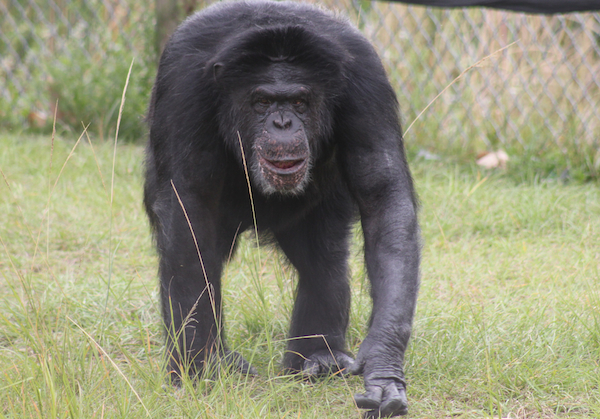 The staff, volunteers, and chimpanzee residents of Save the Chimps have been mourning the loss of Shakey, who passed away recently at the estimated age of 42. Shakey was an outgoing chimpanzee with a charming personality and his loss has left a big hole in our hearts.
Shakey was born in Africa in the early 1970s and arrived at Holloman Air Force Base (HAFB) in Alamogordo, NM in 1977. For a year and a half, Shakey was subjected to multiple “knockdowns” for blood draws and liver biopsies. Then in 1978, Shakey was shipped to the National Institutes of Health (NIH) in Bethesda, MD, where he was kept for the next three years as a biomedical research subject. 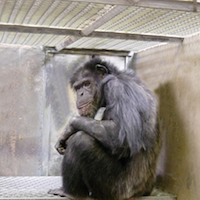 In August 1981, Shakey was shipped back to HAFB. In 1982, he suffered a severe injury to his hand, a seven inch laceration across his palm that went down to the tendons. The wound was sutured, but the hand was not x-rayed. Over time, his fingers atrophied and his hand became malformed. Although we will never know for sure, Shakey’s injury is consistent with a metal door crushing his hand with some force.

Shakey was also used as a breeder, fathering twelve children. Three of his children, Butch, Kallie, and Walden, are residents of Save the Chimps. Six of his children—Angelo, Artie, Bryan, Hope, R.W., and Ricky, are believed to be at the Alamogordo Primate Facility on HAFB. A son, Randy, is believed to reside at Texas Biomedical Research Institute in San Antonio. The whereabouts of two other children, Earvin and Naomi, are unknown. 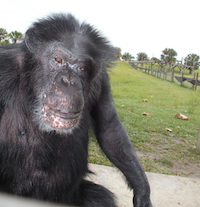 Shakey’s life changed when Save the Chimps rescued him in 2002. He got to enjoy fresh fruits and veggies, play with toys, and live with other chimpanzees. When he moved to Florida, he became good friends with the late great Thoto, and they would patrol their island together. He loved being outdoors, basking in the sunshine. At the time of his passing, Shakey was a member of Doug’s Group, and had a new best friend in Rebel.
Shakey had a winning personality, and was beloved by both his human and chimp friends. He was known for filling his mouth up with a huge amount of water, and squirting his caregivers playfully from head to toe. He enjoyed being sung to (favorite songs: “Shake Your Booty” and “Gangnam Style”), playing chase, and being tickled. He also loved to eat, perhaps a little too much! Shakey also built magnificent cozy nests. After so many years of sleeping in barren cages, Shakey finally had something soft and comforting on which to sleep.

It is impossible to capture Shakey’s unique and winning persona on paper, so we hope you enjoy this video remembrance with veterinarian Dr. Bezner introducing Thoto’s family, including our amazing, wonderful Shakey. 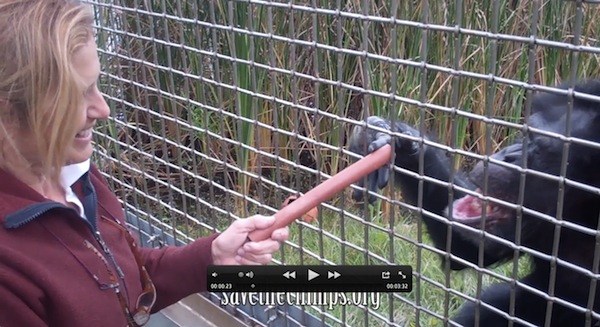 Rest in peace, dear friend. We love you!

Thank you for supporting Save the Chimps and providing Shakey and over 250 others the life they have always deserved.