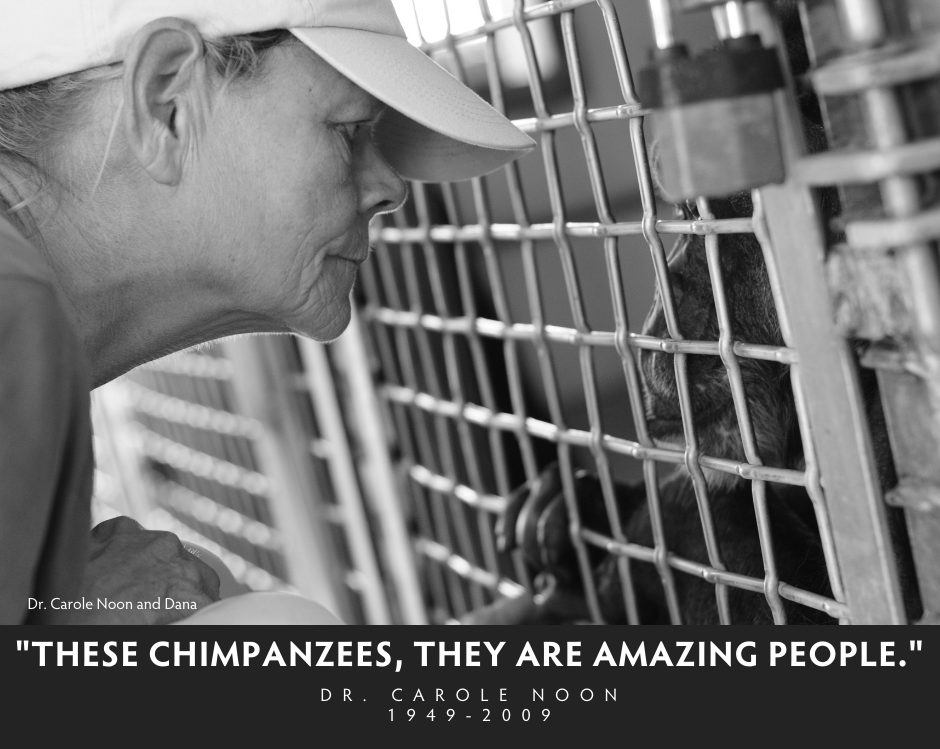 Thirteen years ago today, Save the Chimps’ founder, Dr. Carole Noon passed away of pancreatic cancer in her home on sanctuary property. She remains an inspiration to all the lives she touched and a motivator to carry on her important work. More than 300 chimpanzees have found the peaceful and dignified retirement they deserve thanks to the tireless work of Dr. Carole Noon and the founding of Save the Chimps.

Today, we would like to share one of what she called “Carole Noon’s Chimp Diaries.” These letters to staff were always full of wit and charm, as she updated everyone on the latest happenings at the sanctuary. This particular journal was written after Save the Chimps took over the Coulston Foundation, a biomedical research laboratory. Modifications were being made to the buildings to allow the chimps to live a more comfortable life before they moved to our Florida sanctuary.

Through June 30th, all donations are matched. Your gift will have twice the impact in providing care for our chimpanzee residents. Give in honor of Dr. Carole Noon.

On Monday we took the small mesh off the welded wire that makes up the new window/slide doors between the solid-cement walls in Building 3 so the chimps could touch, groom, or poke, as well as see each other better. We did this because the construction company started installing the cage extensions on Monday.

Above each outdoor 6’x1O’ concrete cell we are taking off the roof and adding a welded wire mesh extension. The extension raises each cage by 4 feet. It means the chimps have somewhere new to go, they can see out the sides of their cages, they can be in direct contact with their neighbors on both sides, they have a new view, they can climb, those who live on the dark side can finally catch some sun and they can see all the chimps who live on either side of them. It is a stinking additional 4 feet and it means everything. 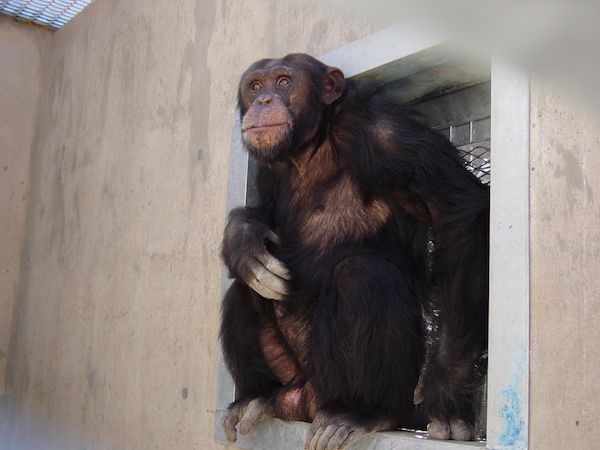 Today, we let the people who live in the first four cages with the new extensions out. Clay was first, the massive teenage boy born at the Coulston Foundation. We opened the door between his indoor and outdoor cages and he sat in the doorway looking up. I swear his eyes were as big as dinner plates as he tried to take in what happened. He finally worked up the nerve to come out.

He made huge displays then would run back inside. He never considered climbing up but part of his displays are jumping up and down. Here is the saddest part – it was clear when he was jumping he was jumping higher than the old ceiling allowed him to jump. All these years he was carefully inhibiting his jumps so he wouldn’t hit his head on the ceiling.

Next out was Boy, Clay’s neighbor. Boy was born in Africa and spent most of his life at LEMSIP in a 5’x5’x7′ cage suspended two feet off the ground. Boy was a blob when I met him. He sat on his ledge, huddled up all bald and old and only came down for meals. He never went outside and showed no interest in the toys or blankets and never said a word. If I had favorites, which of course I don’t, Boy would be one. One of my biggest achievements out here was the day Boy played with me and I heard him laugh for the first time. He talks a lot these days and even uses the empty monkey chow bags to make a sort of nest sometimes. 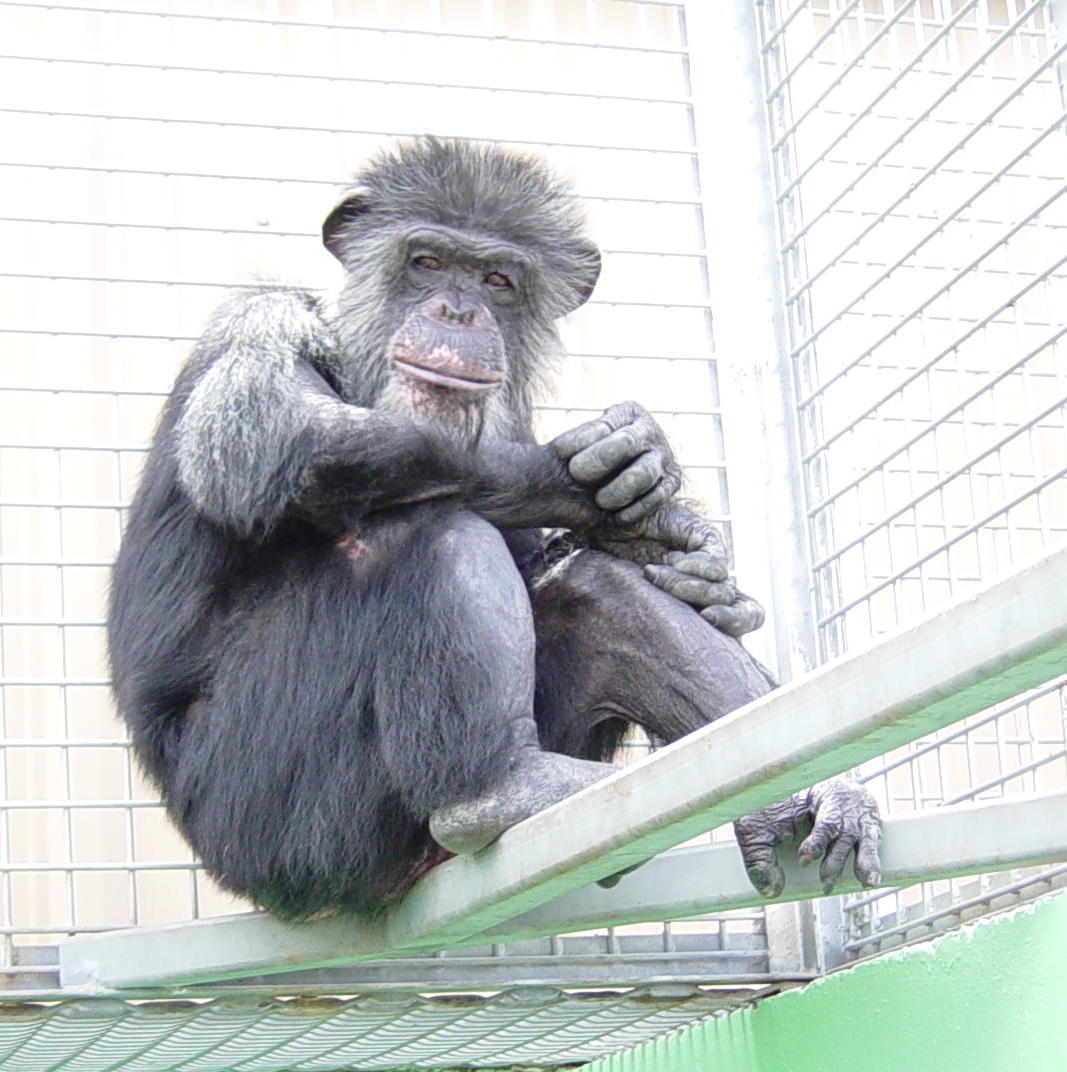 Boy didn’t hesitate to come out. He looked through the window at Clay and then climbed to the top. He spent the rest of the day up there. He rushed inside to grab his dinner and took it to the top to eat while he gazed and panted softly at Brandy – two cages over. More about her later.

Next out was Bubba, also born here. He made a short visit to the top and spent the rest of the day inside. One thing you can always count on with chimps is their curiosity. So, Bubba will come out soon.

And Clay’s curiosity got the better of him and he couldn’t stand it anymore. He finally went to the top of the cage. Remember when he jumped higher than he ever had been able to before? Well, now he hung from the new ceiling. With the new space, he could fully extend his arms and legs and really swing for the first time. It looked like he couldn’t get over this new freedom and he resembled a wind chime blowing about in the wind.

Next out were CJ and Brandy – both born here. Brandy went to the top while CJ did her crazy, really crazy, walk around the cage and threw poop at us. Then Brandy and Boy’s eyes met with Bubba‘s cage separating them. As Bob Dylan would say – “You don’t have to be a genius to see that they’re madly in love.” When Boy rushed out with his dinner to eat it as he was gazing at Brandy he was able to combine food sounds with soft panting and chewing. Pretty impressive. Brandy, however, didn’t go in to get her dinner, she just stayed at the top of the cage looking at Boy.

We waited until after the morning cleaning and the human’s lunch to let the chimps out so we could all be there to see the big event. The staff was as excited as I was. They were encouraging Clay to come out which, much to my surprise, seemed to help rather than scare Clay. When Clay finally climbed to the top they all applauded, which, again, much to my surprise seemed to please Clay. When he started swinging like a wind chime I think I saw tears in some eyes. We all recognized that something was going on between Boy and Brandy and we probably spent more than an hour watching this next step the chimps are being offered before we came back to reality and went back to work.

And here is what amazed me most. For days, as the extensions have been going up, everyone is commenting on them using words like “awesome” and the like. I am thinking all this time “it is a stinking four feet more – pathetic is more like it.” And yet when we opened the doors to the outside, and when the chimps walked through them, I was as moved and overcome as I was watching the Air Force chimps’ release to their 3-acre island.

Some of the Air Force chimps came from the cement cells in Building 3. If they could walk through the open door to the island so can Bubba and the others.

Today was a great day for all of us. Chimpanzees, they are amazing people.

Give in honor of Dr. Carole Noon and your gift will be generously matched by the Ronald J Woods Charitable Trust, giving it twice the impact on the lives of our chimpanzee residents.