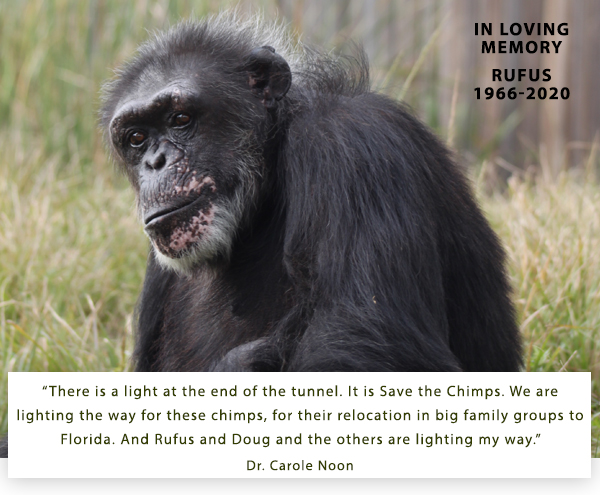 It is with heavy hearts that we write to you of the passing of one of the most iconic and well-loved members of our STC family: Rufus.

But it also is a time to rejoice. Rufus is finally completely free. Thanks to you he spent his last decades in the Florida sun, surrounded by a big, loud, boisterous, loving family.

He spent his days in the sun, eating fresh food, playing with his friends. Thanks to you and the vision of our co-founders Jon Stryker and Dr. Carole Noon.

We wanted to share a little about Rufus and could find no better way than to share some words from Dr. Noon’s diary, dated from 2006. It is apt that today we also mark the anniversary of Dr. Noon’s passing in 2009.

We can only hope she is somewhere greeting Rufus asking if he wants a tickle.

When we took over the Coulston lab Rufus lived in Building 300, the building I instantly started calling the Dungeon. This was no stretch – that is exactly what it was. The Dungeon is a series of 24 cages on each side of a central walkway.

The only lighting came from the overhead florescent lights until we put in the nightlights and later the skylights.

Fifty four chimpanzees lived in the Dungeon – almost all of them alone. Before we

put the doors in between the adjoining cages the chimps could only see the chimps who lived across the hall, not the ones they had been living next door to and hearing all those years.

In the other four buildings the chimps lived in all male or all female groups of about 5 or 6. And they had bigger cages. So I spent most of my first year in New Mexico working in the Dungeon trying to make it livable for the chimpanzees and safe for the humans who worked there.

Like the others I have written about before; Ron, Bobby, Tami and Tarzan, I found Rufus in a cement box in the Dungeon that first day. He was born in Africa, spent some 40 years in the lab, and he was just so sweet and cheerful given his pathetic existence all those years. I discovered Rufus is ticklish. When you poke his sides or neck with a tongue depressor he laughs out loud.

Sometimes, when I would pass his cage too busy to stop, I would look at him and say “I am going to tickle you, Rufus” and poke my fingers in his direction. This made Rufus laugh too. He is so easy. 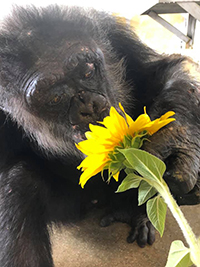 When we started the introductions we moved Rufus up to Building 800. We wanted to get Frieda out of the group of females she was living with as she was being bullied by them and we wanted to get Rufus out of the dungeon. We hoped they might be good friends. Well, they met and while Frieda certainly took the upper hand right away they did become friends.

Next we wanted to introduce Rufus and Frieda to Kay and Gerro, two of the older babies who were around four years old at the time. We decided Rufus would meet the ‘babies’ first and we started with Gerro.

We had a hard time separating Kay and Gerro. They were that close back then. Gerro was miserable and whining on all counts and then we opened the doors between Rufus and Gerro. Gerro was terrified. I didn’t expect such an extreme response from the little guy. Fearing I was traumatizing Gerro I was ready to close the doors for the slightest reason.

CAROLE’S CHIMP DIARY ENTRY or WHY I LOVE RUFUS

Rufus stuck his head through the door of the cage where Gerro was sitting on the platform screaming. Gerro could have run away but I think he was too overwhelmed. Rufus could have rushed through the open door but instead he sat in the doorway without entering Gerro’s cage. This floored me – Rufus clearly understood Gerro’s fear. I think this is called compassion. 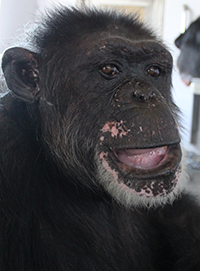 When a chimp wants to play there is a smile (what is called a play face) that goes along with the invitation. The invitation often includes slapping a foot or hand on the ground, bobbing your head in the other guy’s direction but almost always includes the ‘smile’.

You know those scary canine teeth chimps have – the inch long ones? The canines on top are bigger than the ones on the bottom. So, if you want to play and are slapping the ground with your foot and you want to be sure the other guy gets your message, you ‘smile’ by covering your scary top canines with your upper lip exposing just the bottom teeth.

Sitting on his side of the open door Rufus slapped his foot on the ground, a classic play gesture, and smiled. Gerro screamed in response. This was not lost on Rufus either. Rufus covered his bottom teeth with his bottom lip. He was trying to look less scary I guess. Dear Rufus looked like an old man whose dentures were soaking in a glass next to the bed.

Rufus’s patience with Gerro paid off and they started to play. Turns out Frieda could just not get along with Kay (she is a handful) and Kay lives in another group now. The rest of the Rufus group, including Frieda and Gerro, will arrive later this month. The chimps will not go out to the island until the whole group is reunited.

Then we will open the doors and see what they do. I hope Rufus runs through that 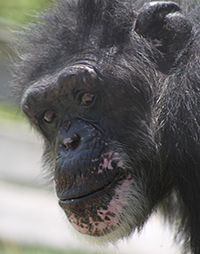 open door, explores more room than he has had in 40 years, climbs every tree and platform in sight and comes back for dinner tired and maybe a little sunburned. I want all of that for Rufus and Frieda and Gerro and for every one of these most deserving people.

Tonight I served the new arrivals their dinner. I poked my fingers at Rufus and threatened to tickle him. He laughed. He behaved badly at dinner and stole food from the others like a proper bully. But I overlooked his behavior because on this night, Rufus is in Florida. He is out of the Dungeon and a million miles from the lab. On this night, my heart could not have sung any louder.

Rufus was estimated to be 36 at his time of rescue in 2002, already nearing his elder years. He went on to live another eighteen years, surrounded by love, in sanctuary. For that, we are grateful.

If you are inspired to, please join us in honoring Rufus’s memory with a gift to our Board Match Challenge. 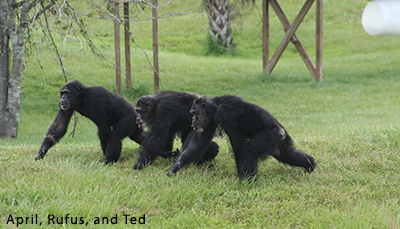 Learn more about how we honor the passing of our beloved residents.