In Loving Memory of Stella 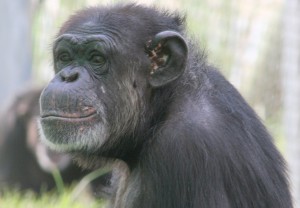 A Star is Gone…It is with deep sorrow that Save the Chimps must share that Stella, a sweet, kind chimpanzee who brightened our lives, has passed away, at the approximate age of 42. Stella was born in Africa in the late 1960s or early 1970s, captured, and brought to the United States in 1974. She ended up at Holloman Air Force Base in Alamogordo, NM. While she was young, she was used as a biomedical research subject. When she matured, she was used in the breeding program. Stella had thirteen children between 1980 and 1997, all of whom were taken from her shortly after birth. Three of her children, Lee, Tara, and Bradley, preceded Stella in death. Four of her children are residents of Save the Chimps: Connor the First (aka Sir Connor), Logan, Moesha, and Whoopie.

Stella’s other children are waiting for their opportunity to find sanctuary. Two of Stella’s children, Julie and Theo, are believed to reside at Texas Biomedical Research Insitute. A son, Ziggy, is believed to be at the Alamogordo Primate Facility, and another son, Barry, may reside at New Iberia Primate Research Center.

Throughout the long years that Stella was used as a breeder, she was denied the opportunity to form lasting friendships. She would often be paired with a male or a female—but then weeks later separated from them. Finally, at some point in the late 1990s or early 2000s, Stella met Geraldine—and they remained together until Stella’s last breaths. Their friendship was deep and abiding, and Stella was Geraldine’s champion and protector. So powerful was their friendship, that upon learning of Stella’s passing, the caregivers did not dwell on their own sorrow, but immediately turned their thoughts and concern to Geraldine.

Geraldine’s own reaction to Stella’s death was one of loyalty but peaceful acceptance. Stella was found deceased inside of her family’s building early in the morning. Although the other members of her family eventually left the room where Stella lay, Geraldine did not. Instead she remained next to Stella, quietly and gently inspecting her body. At one point Geraldine brought a blanket over to Stella as if to cover her with it. We allowed Geraldine to remain with Stella for several hours. She finally moved away from Stella when one of Geraldine’s favorite caregivers came to see her.

Stella was a friendly and gentle chimpanzee, who had a quiet strength and confidence. She was a chimps’ chimp and enjoyed the company of her large family. She reveled in the spaciousness of her island home. Her final years were spent in peace and contentment.

And fancy whispers in mine ear,
That those who once were here beloved,
To friendship and affection dear,
Now from this fleeting scene removed,
Repose, bright star, in thy ethereal sphere.
–from “To The North Star” by William B. Tappan

Stella, our dear star, we miss your smiling face. We hope you rest peacefully knowing that we will care for your dear friend Geraldine until the two of you meet again.

Thank you for supporting Save the Chimps and providing Stella and
over 250 others, the life they have always deserved.