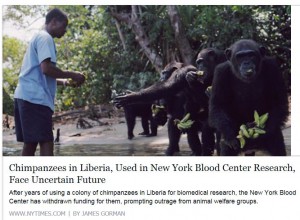 Save the Chimps is distressed and concerned by the plight of these chimpanzees. Although it appears that the Liberia chimps are no longer in immediate danger – thanks to the support of The Humane Society of the United States, the Arcus Foundation,  and others – there is great urgency to the need for a solution to be worked out. New York Blood Center (NYBC) —an organization with hundreds of millions in assets and with rapidly increasing revenue over the last two years–exploited these chimpanzees for decades for their own profits and has abandoned them.  Some of the chimps were captured from the wild, many were used in invasive medical research for decades and suffered during the country’s civil war when they would go weeks without food and water and lost many of their companions.

Save the Chimps is appreciative of and commend those who have stepped forward to help care for these abandoned chimpanzees and resolve this tragic situation.

We urge you to join others in urging the NYBC to reconsider their withdrawal of support.

FAQ:
Q. Can we bring the chimps to Save the Chimps?
A. No. Sanctuaries like Save the Chimps are unable to because since the 1970’s there have been laws governing and prohibiting their transport to the United States for any purposes.

Q. What is being done?
A. The Humane Society of the United States, Humane Society International, and concerned individuals have sent emergency funding to ensure that the chimps don’t suffer from dehydration and starvation—which is what would have happened if people didn’t respond to this crisis.

Q. How can I help?
A. Sign the Change.org petition “to urge NYBC to reinstate funding for this chimpanzee colony before it’s too late!”

Send a letter to NYBC President and CEO Christopher Hillyer and tell him to reinstate funding for these chimpanzees immediately!

Participate in the fundraising/fundsourcing campaign being orchestrated by HSUS

Call Christopher Hillyer, the President & CEO of the NY Blood Center, and demand that his organization fulfills its obligation and promise to provide lifelong care to the chimpanzees used in their medical experiments: (212) 570-3000.