Honoring the Memory of Our Beloved Thoto 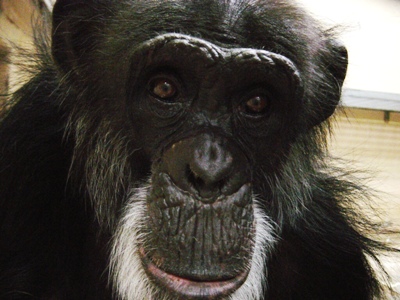 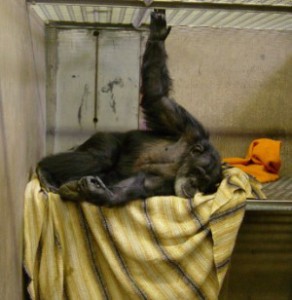 Save the Chimps sadly announces that our beloved Thoto has passed away of heart failure, at the estimated age of 46. Thoto was most likely born in Africa. He was captured and brought to the United States as an infant, and was trained as a circus performer. During his tenure with the circus, he performed with the well-known clown Emmett Kelly, Jr. and even made an appearance at The White House.  In 1986, Thoto was sent to The Coulston Foundation in Alamogordo, NM, where he was used for breeding and biomedical research. He fathered one son, Chaka.

Thoto was rescued by Save the Chimps in 2002. He was living alone in a building called “The Dungeon,” but was introduced to other chimpanzees prior to relocating to his new island home in Florida. His journey was documented by PBS in its Nature documentary “Chimpanzees: An Unnatural History.” Thoto enjoyed the friendship of his companions Scarlett, Millie, and Shakey, and was showered with affection by his adoring caregivers. He was well known for his fondness for blankets, shoes, headbands, and spaghetti. 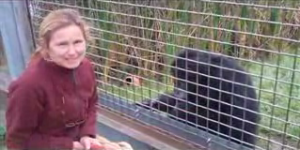 Save the Chimps said goodbye to a truly special chimpanzee when our beloved Thoto succumbed to heart failure. It is a deeply personal and solemn time when one of our chimpanzees passes away and a remarkable quietness settles over the entire sanctuary. Everyone loved Thoto, but he held a very special place in my heart, as anyone at Save The Chimps will tell you. Whenever I mourn a death here, it brings back memories of the wonderful animal friends I’ve enjoyed through the years. I think of Lili, my first dog who showed me the joy of the human-animal bond , Max-a-Million, (the wonder cat that wasn’t afraid of anything )and dear Dudley-Do-Right, a lab that could do no wrong in my book. I think back over the patients I’ve cared for and how they taught me that all animals deserve a life free from suffering.  And of course, I think of the many chimpanzees I’ve had to say goodbye to over the past 10 years, way too many to write about here. I remember Dana, the grand dame of STC, who showed me how incredibly forgiving and resilient research chimps can be and taught me never to give up until they give up.  I reflect on how big handsome Ron came back from the brink of death to live another six years enjoying life in Florida. I still remember holding my breath as I watched his big hands surround tiny Melody and how gentle he was with her. 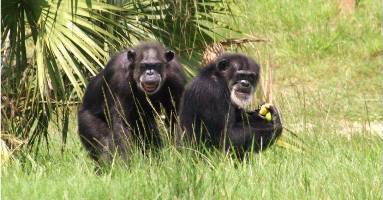 There are a lot of sad stories surrounding research chimps, but today I want to celebrate Thoto’s life after Save the Chimps rescued him and 265 other chimpanzees from the bankrupt Coulston Foundation.  I want to tell you how much fun it was to transport Ron and Thoto to Florida in the specially designed truck that allowed me to ride in the back with them and monitor their health. Ron slept most of the way, but Thoto and I shared treats, played tickle, watched videos and napped our way across Texas, Louisiana and Florida. It was wonderful to see Ron and Thoto go out on the island for the first time, an event documented in the award-winning film, “Chimpanzees – An Unnatural History”, by Alison 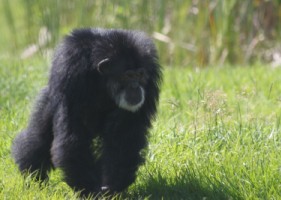 Argo. Ron was tentative as he left the building, but Thoto grabbed his blankets, leapt out of the door, said goodbye to spectators and ran out on the island to sleep under the stars. It was a precedent that continued for the rest of his life. Thoto’s beginning was different from the typical research chimp. He was bought as an infant and raised by humans to be a circus performer. Like most entertainment chimpanzees, as he matured he became impossible to control. All of his teeth were removed. Eventually, he was sent to the Coulston Foundation, 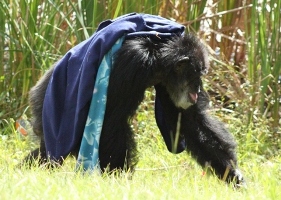 a laboratory that eventually closed because of animal welfare violations. Our founding director, Dr Carole Noon, had a special place in her heart for these unfortunate chimps caught between two worlds. They were too dangerous to live in the human world, yet they had no understanding of the nuances of chimp etiquette. I can’t imagine what those first few months at Coulston were like for Thoto, left by the only family he knew and put in a cold, cement cage surrounded by screaming chimpanzees. 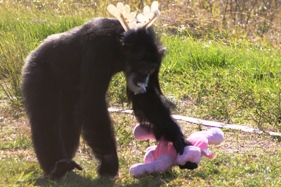 Thoto loved being outside. He had a favorite spot under a clump of trees by the water and one day Kyle, one of his primary caregivers, counted 52 blankets in his nest. When you stopped by, he would pop his head up over the grassy knoll and then come running to say hello. You got the feeling that he enjoyed your company as much as you his and it was a pleasure spending time with him. I’ll admit it: two years ago, after we revived Thoto from a near-death experience due to his heart condition, I started spoiling him rotten. He loved shoes, bunny ears, spaghetti, pizza, and sunglasses in that order. He was fascinated by well -manicured toes and preferred the company of women to men.

I miss Thoto every day and I tear up writing this. I’ve added him to the beings that I carry forever in my heart. My heart is getting very heavy……but I will make peace with the sadness yet again because I can’t imagine my life without these wonderful chimpanzees.  I am blessed to have known all of them.

We are sharing our thoughts and memories of Thoto with this video memorial that we hope captures a bit of his incredible spirit and charisma. Thoto’s dearest friend and greatest champion, Dr. Jocelyn Bezner, also shares her memories of Thoto in a deeply moving tribute to an incredible chimpanzee. 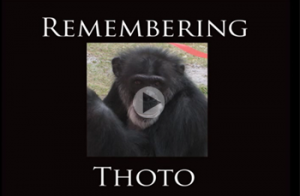 Thoto, our love for you knows no bounds. You are deeply missed.

Thank you to everyone who makes our work possible.  It is because of your compassion and generosity that chimps are able to live out their lives in peace.