September 16, 2011 is the 9th anniversary of Save the Chimps’ rescue of the Coulston Foundation chimpanzees, aka “Bananaversary.”
We are doing something very special to celebrate: A Migration!

This Bananaversary, eight “special needs” chimpanzees  will embark on their journey to Florida. They will be moving in to the former Introduction Building, where the Air Force chimps first lived when they moved to Florida. We now refer to this building as the “Special Needs Building” because it will house chimps with unique health concerns and social needs. The interior of this building was recently renovated by our hardworking and devoted Maintenance Department, under the guidance of long-time STC employee Cliff Peterson. We are currently seeking support  to expand the exterior to give these very special chimps an opportunity to feel the grass between their toes! But we decided we just couldn’t wait for the exterior to be finished to move the chimps, since the building is now able to securely house chimps once again. We were happy to tell these eight chimps to pack their bags for their turn on the Great Chimpanzee Migration!
Just What Makes These Chimps So Special?
The chimps moving to Florida on September 16 were not able to join larger groups, and do better with a small family of chimps (or in Clay’s case, as a lone wolf.)

Clay is a very handsome, playful guy who just doesn’t like other chimps. We’ve tried many times to find him a companion, but he has made it very clear that he just wants to be alone. But he really enjoys playing chase with his caregivers, painting, and dancing about if someone sings to him. His charming personality has won everyone’s heart. 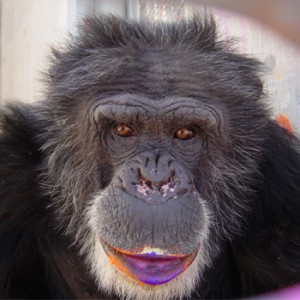 Ridge has been introduced to so many chimps over the
years, but never found his niche, until now. He is a ladies’ man, and he now enjoys the friendship of Libbel, Plum, Cayenne, and Indie. He has compulsively picked at and worn down his teeth over the years, possibly from anxiety, but now his caregivers report that he seems happy and content!

Libbel, aka Libby, is a gentle female who spent years alone at LEMSIP. She had a hole in her skull which leaked cerebrospinal fluid under her skin. Had it burst, she would have died. Our skilled veterinarians performed  surgery to repair the defect. Libbel is also a self-mutilator. If she is injured in any way, she picks obsessively at the wound, making it worse. We are careful to only let her live with chimps who will not injure her, such as Plum, Cayenne, Indie, and Ridge.

Plum is Libby’s best friend. She is not too fond of human beings, but we don’t blame her for that after her years of living at LEMSIP and Coulston. She is also friendly with Cheetah, Timmy, Cayenne, Indie, and Ridge.

Cayenne and Indie are two peas in a pod! Also originally from LEMSIP, these girls are amiable, outgoing, and love to eat! Like Plum, they are friendly with many of the chimps in the Special Needs Building, including Cheetah, Timmy, Libbel, Plum, and Ridge.

We look forward to welcoming these wonderful chimps to Florida and invite you to follow along with their journey on Facebook!

There are ONLY 19 chimps left in our New Mexico facility!!
They need YOUR help to get home.

Thank you for all you do for the chimps.

Your compassion and generosity has enriched their lives….

…and they deserve it!