Save the Chimps has sadly lost a very special old lady, Gertrude, to heart failure at the estimated age of 42. A member of Kiley’s Family, Gertie (or “Gertie Birdie” as her caregivers liked to call her) never sought attention from humans. She preferred to keep quietly to herself, and focused her energies on her chimpanzee friends and family. Her complex and tragic background gives us insight into her withdrawn personality. Gertrude was born in Sierra Leone in the early 1970s. In 1975, she was captured-her mother most likely killed-and was shipped to Holloman Air Force Base in Alamogordo, NM. Within the first year of her arrival, she was anesthetized at least 30 times. Often it was simply to have her blood drawn, but little Gertie also had to endure multiple liver biopsies. Young Gertrude was then placed in a study where hormones were injected into her body to test the results on her reproductive system. Soon after that, she was also subjected to diuretic research.

Following these studies, Gertrude was placed into the breeding program at approximately 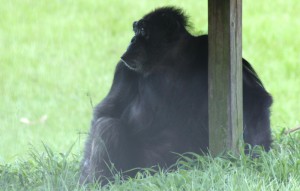 6 years of age, well before puberty; she gave birth to her first child when she was 12. She had a dozen children over a period of fourteen years, all who were taken from her soon after birth. The first five times she had a child Gertrude was considered to be a very good mother. She cleaned and nursed the babies, just as her mother would have done for her. Despite this, Gertrude’s children were kidnapped and taken to the laboratory nursery. In the wild, a female will give birth to a child who will stay with her for the next five years, and during that time she will not have another. By taking her children, the laboratory ensured that Gertrude would get pregnant again quickly. By her sixth infant, Gertrude gave up, and left the baby unattended in her cage for the lab workers to retrieve. Gertrude’s final experience with birth must have been extremely traumatic. Gertrude was found with her child breeched, wedged halfway inside of her body, and stillborn.

There are multiple year gaps in Gertrude’s laboratory records, so we do not know what she had to endure during those time periods. What records do exist show that she was anesthetized quarterly with ketamine for physicals, even when she was pregnant. In 1997, custody of the chimpanzees at Holloman Air Force Base was transferred to the Coulston Foundation, a biomedical research laboratory in Alamogordo, NM. Gertrude was relocated from Holloman to the drab Coulston lab. 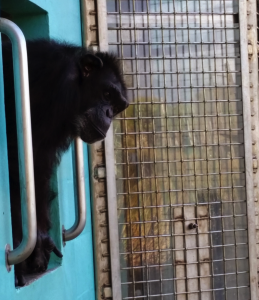 Save the Chimps rescued Gertie in 2002, after The Coulston Foundation went bankrupt due to severe violations of animal welfare laws. Gertrude seemed to embrace her retirement, enjoying all of the fresh food and enrichment she now received. She particularly loved oranges, her absolute favorite food. She became an elaborate nest builder, weaving blankets together to make a large comfy nest to relax in. How she must have longed to build a nest all those years in research!

Gertrude was introduced into Kiley’s group, and relocated to a spacious island home in Florida. One of the chimps in her family was her daughter, Ariel, but sadly they did not seem to recognize they were mother and daughter. However, Gertrude clearly cherished the company of other chimpanzees, and finally had the chance to form lasting friendships. Gertrude was a mother figure to a younger female in the group, “Baby” Kay (who is no baby anymore!) who had been taken from her own mother. Gertrude and Kay liked to eat together and were never far apart. Gertrude also developed close friendships with eld 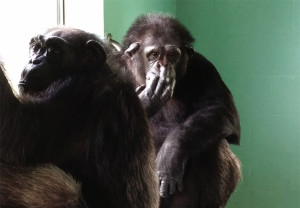 er chimps in her family, Lupe, Henrietta, and the late Roman, who like Gertrude had been captured in the wild decades ago.

Towards the end of Gertrude’s life, an unexpected friendship with Norene blossomed. Norene is the highest-ranking female of Kiley’s family, and often intimidated Gertie. Surprisingly, Norene became Gertude’s best friend when she started to slow down due to her age and progressive heart disease. Kay, who seemed to understand that Gertie would be leaving soon, became more distant, and Norene stepped in to fill the void. Norene was Gertie’s constant companion, engaging in long grooming sessions and protecting her if the males in the group became too rowdy. They were even spotted gently playing and laughing. Sometimes they were so wrapped up in each other that it was difficult to get their attention to eat at mealtime. (Since Norene absolutely loves to eat, that’s saying something!)

Gertrude had a strong will to live and survived with her advancing heart disease much longer than expected. She passed away surrounded by the love of her chimpanzee and human family. One of her closest caregivers, Janie, remembers Gertrude affectionately:

“During the four years I knew Gertie (aka Gertie Birdie), I can probably count on one hand the number of times she politely acknowledged my presence. Once she became sick however, our friendship changed and she became a little more warmhearted towards me. I would gently speak to her and tell her how much I loved her, and I truly think she understood my sincerity. She would look me in the eyes, something she never often did before, and hold my gaze. She also responded to me twice when I panted at her in greeting, once by reaching her hand out in greeting and another time by puckering her lips at me. I was so surprised and touched, because she had never acknowledged me in this way before. She was a very strong woman who knew exactly what she wanted: her island, oranges, and her chimpanzee friends. Being a part of Gertie’s life was a unique experience, and I will cherish her distinguished personality for the rest of my life.”

Gertrude is preceded in death by her sons Andrew and Max, a daughter Echo, and an unnamed stillborn child. She is survived by her daughters Ariel, Geraldine, Mallory, Polly, and Yamili of Save the Chimps. Two of Gertrude’s other children are waiting for their chance to retire to sanctuary. A daughter Francis is believed to reside at the Alamogordo Primate Facility on Holloman Air Force Base, and another daughter Tiffany is believed to reside at the Southwest National Primate Research Center in San Antonio, TX. The whereabouts of a son, Andy, are unknown.

Gertrude, we are so sorry that you had to endure such hardship in your life at the hands of humans. Your dignity and independent spirit are missed.

We promise to take care of your friends and your children who call Save the Chimps home, until it is their time to join you. We love you. 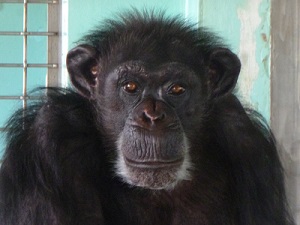 Our supporters can join us in honoring Gertrude with a donation in her honor.

Thank you for your compassion and support. Your generosity is what ensures our beloved chimpanzees live out their lives in peace and dignity.

It is important to us to honor each chimpanzee who passes away with an individualized tribute. Announcing the loss of one of our residents is not immediate because it takes us time to mourn and put to words the life, memories, and personalities of each individual.