Last month, ten chimpanzees from Seve’s Group arrived in Florida, leaving eleven members of their family still in New Mexico. Our plan originally was to move those chimps in two separate trips, since the trailer was designed to carry at most ten chimps. However, the question nagged at the back of our minds: could we possibly squeeze just one more chimp onto the migration trailer so that all of the chimps could travel together? It turns out, the answer is yes! New Mexico maintenance staff members Duane Harris and Bill Basden played what was essentially a game of transport-box-Tetris in the trailer until they found a configuration that works. There were some compromises that had to be made: one chimp will only have a small section of a window to peer out of (but blocking the view entirely was simply not an option—those window seats are too important), and two chimps will not have close visual contact with other chimps riding in the trailer (usually best friends are paired so that they can see each other.) But since the chimps usually spend most of their time gazing out the window and not at each other, and because they can see other chimps across the hallway of the trailer, we decided that this too was worth bringing all eleven of Seve’s Group in one fell swoop.

The eleven wonderful chimpanzees that are making their way to their island home are: Anna, Apollo, Chelsea, Deanna, Kioki, Kira, Ricky, Scrappy, Seve, Val, and Wade. They are due to arrive in Fort Pierce, Florida Saturday morning, rest and be reunited with the other members of their family, and Sunday morning they will set foot onto the island. All of the chimps except Ricky were born at The Coulston Foundation and have never felt grass between their toes. Ricky was once a circus chimp, so it’s unknown if he has ever had that opportunity. But what we do know about Ricky is that he prefers the outdoors, so we are certain he is going to enjoy his new home! 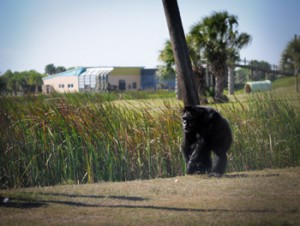 This unprecedented migration of eleven chimpanzees was generously sponsored by Kevin O’Malley and Jennifer Goldstein. Thank you, Kevin and Jennifer!

Many pant-hoots of thanks go out to all of our generous supporters
who make the important work of Save the Chimps possible!