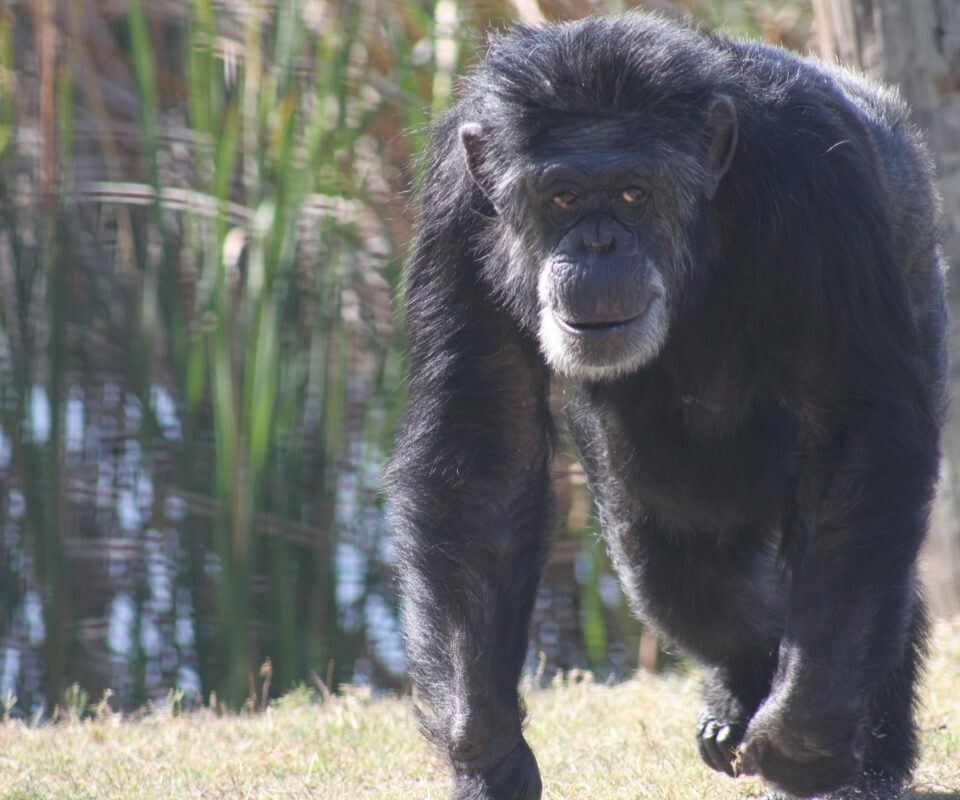 Hello, my name is
Yvette

I was born in Africa in approximately 1968. In the early days of primate research, it was common practice to capture infant chimpanzees in the wild for use in laboratories. Because a chimpanzee mother would not willingly give up her baby, considerable force would have to be used against the mother and other family members, devastating the group, often killing adult family members, and terrifying the baby.

I arrived at The Southwest Foundation for Research and Education in Texas in 1975. During my time there, I gave birth to three babies. My first child was a son, Conrad. The records are vague about how long he stayed with me. Two years later, I had a daughter, Edna. I was a good mother and bonded with her. Edna was nursing, and things were going well until she became sick. As a precaution, the decision was made to take Edna to the nursery for medical care when she was less than two weeks old. Fourteen months later, I gave birth to another daughter, Ida. We stayed together for six weeks before Ida was taken to the nursery to be raised by human caregivers because the staff felt I was neglecting her.

Four months later, I was sent to the White Sands Research Center in New Mexico. I arrived in 1982 and was soon added to the breeding program. I participated in research between births. My daughter Ida was also sent to White Sands, but we never crossed paths after we arrived in New Mexico. To control reproduction, laboratory staff selectively placed males and females together. Two years after arriving in New Mexico, I gave birth to a healthy baby boy, Josh, who was taken to the nursery that same day. Fourteen months later, I gave birth to a daughter, C.J. I was taking good care of her, and C.J. had started nursing. Despite these positive signs, C.J. was taken to the nursery two days later. My next baby, Mario, was born fifteen months later. This son was also removed from my care and sent to the nursery the day after he was born.

Six years later, I gave birth to a daughter, Jasmine. I was a good mother and was attentive to her needs. When Jasmine was two months old, we were introduced to Crystal and her infant son. It was common for The Coulston Foundation to form groups of mothers with infants. When Jasmine was nine months old, she became sick, and the staff felt it was in her best interest to move her to the nursery, where she could receive medical attention and more hands-on care from her caregivers. Fortunately, when Jasmine recovered several days later, she was returned to me and stayed with me for two more years.

The staff at the Coulston Foundation filled out questionnaires about the chimps in their care as a way to record and share information. They described me as someone who enjoyed grooming, especially people rubbing my head. I also liked to have my back scratched. At STC we do not have direct contact with the humans for safety reasons, but they do groom us with a “tickle stick,” a length of hose they use to touch the chimps while keeping their fingers at a safe distance.

In 2000 I became part of a small group of middle-aged females. When we high-spirited ladies first met, there was a bit of drama, and they needed a mediator. I brought calmness to the situation and was described as the “go-between girl.” This is when I met my best friend, Mandy, and formed a friendship that brought both of us incredible joy and companionship over the years. I shared my food and enrichment with her, but it was so much more. We were inseparable. We migrated to Florida in March 2011 and spent our days exploring our beautiful island home, basking in the Florida sun together. At bedtime, we made fluffy nests and slept side by side every night. Sadly, Mandy passed away in 2016. The group seemed to know I was grieving, and many of the boys were extra kind to me. Kendra, a young girl who adored Mandy and followed her everywhere, stayed close to me and transferred much of that affection toward me. The support meant a lot to me while I grieved the loss of my best friend.

I am a respected matriarch who provides guidance and comfort to many of the boys in the group. This is especially true for my relationship with Seve, a male who has struggled with a dark, difficult past. When he’s feeling agitated, he will seek me out for comfort and solace. My soothing presence while I groom him can prevent him from escalating into self-abuse when he is experiencing extreme stress. I am also strong and have no problem stepping up and putting the boys in line when they need it. Drama seems to be a daily occurrence in chimp life, and I will definitely express my opinion about the situation. I’m happy to be spending my golden years surrounded by the companionship of my chimpanzee family, the loving daily care of staff, and the freedom to choose how I would like to spend my days.

Yvette has a beautiful soul, and it is a privilege to know her and see her positive influence on the group. After everything she has been through over the years, we are happy she has found peace in the Florida sun, surrounded by a family who loves her.