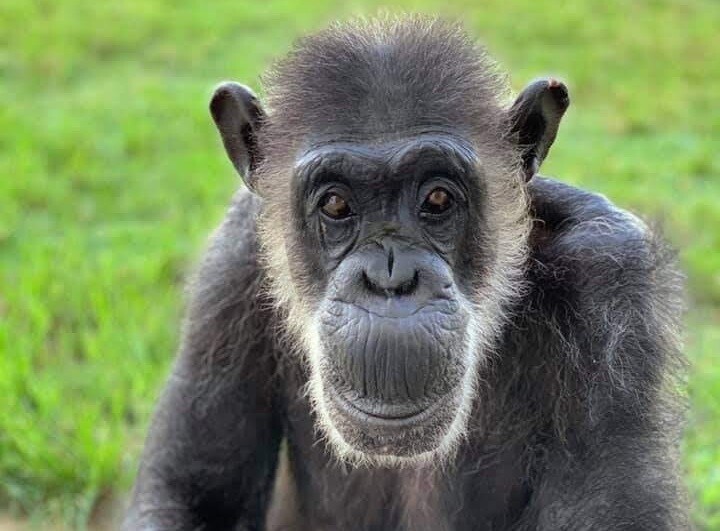 Hello, my name is
Yolanda

I was born in Africa in the late 1960s. In the early days of primate research, it was common practice to capture young chimpanzees from the wild for use in laboratories. Because a chimpanzee mother wouldn’t willingly give up her baby, considerable force would have to be used against the mother and other members of the group. I arrived at Holloman Air Force Base in May 1975 with two other chimpanzees and six months later I was put into a series of research projects.

Once I was old enough, I was used in the breeding program where I gave birth to several babies over the years. Reproduction was controlled by laboratory staff by selectively placing males and females together. I gave birth to Mork in 1979, Kim in 1982, Elmer in 1985, Harley in 1988, Lester in 1990, and Millie in 1992. Unfortunately, I was not allowed to keep any of my babies for more than a day or two because the staff sent them to be raised by humans in the nursery.

Over the years the staff at the Coulston Foundation noticed how much I enjoyed the company of younger chimps. Eventually I lived in a group of mothers with infants. I didn’t have a baby of my own at the time, but I truly embraced the role of aunt. I was so charmed by my friend Olida’s baby, I would carry Megan as if she were my own. Olida was unconcerned while her baby was in my care. This trust continued over the years when Olida gave birth to a daughter at Save the Chimps due to a failed vasectomy. I was one of the first family members she allowed to touch her precious infant, Maya.

The staff at the Coulston Foundation completed questionnaires about the chimps in their care as a way to record and share information. They talked about how much I enjoyed grooming and the company of the females in my group which is still true today. One of my longest friendships is with another older lady named Lisa. In the 1980s we were placed together after I had just suffered a miscarriage and the staff at The Coulston Foundation felt I needed companionship while I recovered. In the 1990s I lived in a group with Lisa and her baby, Bambi.  At Save the Chimps, we became members of Rufus’ family and migrated to Florida together in June 2006. Our tight knit group loves to raise a ruckus and chase each other around the island. Even though I’m elderly, I often jump right in with Lisa at my side for back up.  These harmless scuffles settle quickly and are followed by grooming sessions where we reinforce friendships and smooth over any hard feelings.

I have heavy eye lids and high set ears. These adorable features I’m told resemble the beloved science fiction character Yoda. Caregivers often use this as a way to describe me when new staff are learning about the chimps in Rufus’ building. I also have a very distinct voice which can be heard over most anyone else when I’m expressing a strongly felt opinion.

I am extremely fond of veggies, especially celery and I love resting in hammocks. Retirement to the sanctuary has also provided me with a lush, green island in the beautiful Florida sunshine where I can spend my days in comfort.