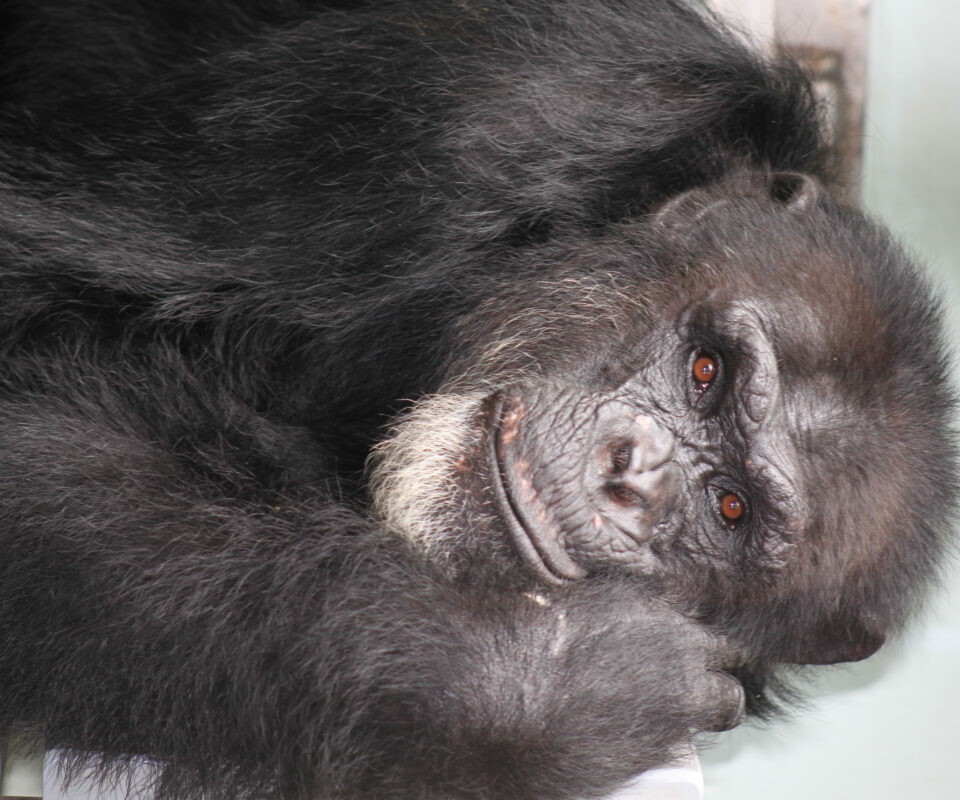 Hello, my name is
Worthy

I was born at the Coulton Foundation to parents Monica and Carlos on January 27, 1989. I immediately began nursing, a critical first step for all newborns, and the decision was made to leave me with my mother. We were together for almost two years when I was weaned and removed from her care to be introduced to a group of chimps my own age. During my younger years, I received routine physicals and blood work and entered my first study at eight and a half years old. My file has minimal information on what the study entailed. Two years later, I was used in another study that appeared to be limited to two blood draws four months apart. A behavioral assessment completed by the staff in the lab when I was young described me as a little shy but as someone who interacted well with humans. Three and a half years later, as I was approaching adolescence, I was described as semi-social and someone who can be “grabby.”  Even now, in the more relaxed environment of the sanctuary, I can be reserved. I initially present as a serious, stoic outer layer, but once you get to know me, the relaxed side of my personality comes out. This seems to be a family trait I inherited from my father and shared by at least a couple of my brothers. At Save the Chimps, it’s not unusual to find certain personality traits that run through a family line, even among siblings who were not raised together in a family setting.

Natural leadership ability also runs in my family.  In fact, Carlos’ sons are known for their magnificent presence, and all his adult sons have played influential roles in each of our groups.  Whether it was acting as a mediator during introductions, becoming a protector of a new member of the group, or excelling at the duties and obligations of being an alpha male, each of Carlos’ adult sons has played a significant role in their groups’ hierarchies. In my case, I have been all those things and more. I am firm but fair when dealing with chimp situations in my group and am highly respected. Because of these qualities, when it came time to introduce a new chimp, Allie, to the group, I was a natural choice to help her become part of the family. Allie lacked chimp social experience. With patience and kindness, I instinctively knew just what she needed to give her the confidence to transition into the chimp world. Once we bonded, I acted as a mediator during some of her introductions.

My group includes my younger half-brother, Gabe, also Carlos’ son. Affectionately nicknamed “Baby Gabe,” he is starting to come into his own and move up the social hierarchy. Lucky for him, I am an excellent role model and continue to provide guidance and redirection when Gabe pushes too far, especially with the old ladies in the group. I have a close relationship with Gabe’s mother, Gabby, and provide backup and support for her in the group. I love the ladies and follow the females in the group looking and hoping for their attention. When a female catches my eye on the neighboring islands, I’ve been known to spend the afternoon wistfully watching from across the waterway. When I relax, my friends Spike, Jude, and I enjoy spending time together grooming and playing.

As an adult, I was diagnosed with diabetes. Between my cooperation and the diligent monitoring by my caregivers, it is being successfully managed. I willingly provide urine samples on request, which allows the staff to test my glucose levels on a regular basis. When asked, I present an arm for injections and even follow my diabetes-friendly diet! Helping me get to this point could have been difficult, but thanks to my brilliance and understanding, the training process was smooth and quick.

Sometimes it can be difficult to put into words the exceptional qualities and influence of certain chimps. I fall into this category. Overall, I am a “chimp’s chimp,” which makes moments shared with caregivers extremely special. Whether it’s a subtle head bob greeting or a short play session, these times are treasured by staff. Equally enchanting is watching me in my group as I maneuver social situations with style and grace. The sanctuary setting has allowed me to reach my full potential, and my chimp family has truly benefited from my leadership abilities.