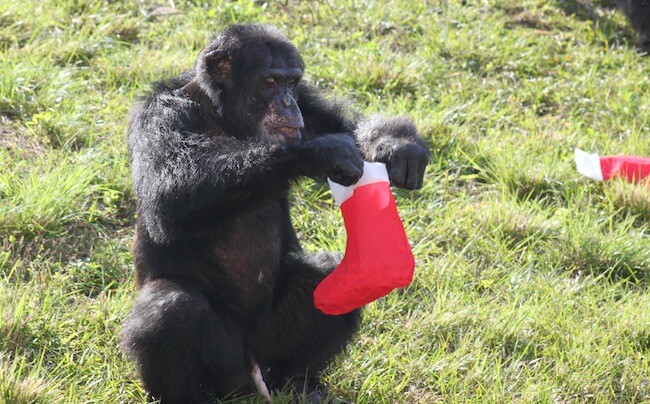 Hello, my name is
Wayne

I was born on May 19, 1985 at the Laboratory for Experimental Medicine and Surgery in Primates (LEMSIP) in New York State, where my mom Debbie and dad Lew were “on loan” from the U.S. Air Force. I was lucky to stay with my mother for the first year of my life.

Sadly, when I was still just a toddler, I was taken from my mother and sent to a laboratory nursery, where I was repeatedly anesthetized for monthly exams, blood draws and painful liver biopsies. When I was 4-1/2 years old, I was moved to a section of LEMSIP known, ironically, as “Junior Africa.” There, I began my life of social isolation and invasive, painful biomedical research studies. When I was 8 years old, I was moved to an adult chimpanzee wing, where I lived alone in a 5’ x 5’ x 6’ cage suspended off the ground. During this time, I was anesthetized with ketamine 150 times and received 33 liver biopsies. I was terrified and alone, subjected to relentless and painful medical procedures, and suspended in a cage smaller than a closet. My records from that time note scars and sores on my arms from self-mutilation. I was an emotional wreck.

In 1996, when I was 11 years old, LEMSIP closed and I was shipped across the country to another laboratory called the Coulston Foundation in Alamogordo, New Mexico. I was still mistreated, but I was able to live in a small group of other males from LEMSIP, so at least I wasn’t alone. For the first time in nearly 7 years, I had a solid floor under my feet instead of bars. It was at Coulston that I saw the outdoors for the first time in my life, if only from an indoor/outdoor concrete run.

I thought I was finally free from painful medical testing, but I was wrong. The worst was yet to come. In 1998, I was isolated for three months for a “biomedical research study,” anesthetized weekly, “dosed” with an unknown material, and subjected to multiple blood draws. In 1999, I was assigned to a highly invasive and extremely painful experiment known as the “Spinal Dynamics” A healthy spinal disc was removed from my neck and replaced with a prosthetic disc, without pain medication. I don’t know if the prosthesis in my neck was ever removed, but I know that some of the other chimpanzees in the study were left with a disc missing from their necks. The USDA eventually documented multiple violations of the Animal Welfare Act in the study, but not until it was too late for some.

By this time, I was just a teenager, but I already had been anesthetized 186 times. I was living in despair with three other males whom I’d known from LEMSIP, when suddenly our lives took a dramatic turn. On September 16, 2002, the Coulston Foundation went bankrupt and turned over 266 chimpanzees to Save the Chimps (STC)—including me! My buddies and I joined Rufus’s Family, the largest chimpanzee group at STC and the largest chimpanzee group found in the Americas. STC operated the former Coulston lab as a sanctuary until new island homes could be built for us in Fort Pierce, Florida.

In June 2006, when I was 21 years old, I made my second cross-country journey. But this time, I arrived at a beautiful, three-acre island home. It was the first time in my entire life that I had ever felt grass and earth under my feet.

Here on my island home, I enjoy roughhousing with my friends Brett, Spudnut and Gerro. I don’t like to ruffle anyone’s feathers, though, so I’ve learned to tone it down a bit with the older ladies. I have a reputation for being diplomatic and gentlemanly. I like to roam around to the back of my island and watch other groups, like Alice’s Family and Ron’s Family. My long-distance crush is the beautiful Mona, who lives next door on Doug’s Island, and we enjoy gazing at each other from afar. I’ll admit I’m a little finicky. I like my hands to be clean, and I wash them frequently. I like bananas, but I am repulsed by banana peels, so my caregivers give me bananas with the peels removed. I like apples too, but I prefer to save those for dessert. After all I’ve been through, I am thrilled to be living a life of friendship and fun on my sunny Florida island home.

Support this quiet, gentlemanly chimp live a life filled with the pleasures of friendship and fun in the Florida sunshine by donating today.